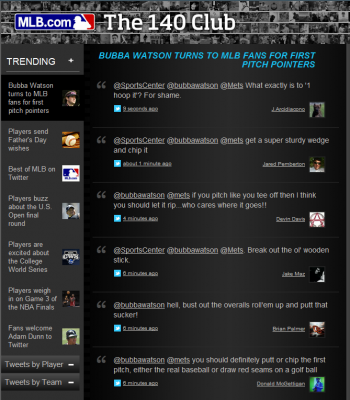 Major League Baseball announced last week that it has rolled out a curated Twitter news service for social content related to the league. The site aggregates Tweets from players, media members and others discussing the league on the microblogging site to bring fans a unified format for consuming baseball-related content – a development that may encourage sports marketers to get in on the social action, and one that should confirm for all marketers that Americans turn to social media to keep up with news.

According to a release from Major League Baseball, the most popular and discussed news and Tweets will be placed into the feed. Users can see trending topics in the left side bar of the page and click the topic to see all of the associated Tweets. Aside from trending news, fans can sort the content according to their favorite players or teams to ensure they see only news relevant to them.

Sporting events are among the most popular topics for discussion on Twitter, and leagues all around the world have sought different methods of leveraging social content to improve their own marketing.

On the The 140 Club, all content is visible to users, so they can access images shared and other links directly from the page. Major League Baseball has partnered with social curation provider Mass Relevance to create this tool.

“Tweets connect us in groundbreaking ways to previously inaccessible points of view,” Dinn Mann, executive vice president of content for MLB.com, said in a release.

“Baseball personalities, fans and celebrities are weighing in at a prolific pace on topics of all kinds, and The 140 Club is reliable, entertaining place to get inside the ropes and eavesdrop or take part.”

Other sporting events that have become popular topics on Twitter include both the Super Bowl and matches from the UEFA Champions League. Brafton reported that companies in related industries (or with target audiences interested in these topics) can include relevant website content in their Twitter and Facebook feeds to use these events to draw attention to their social media marketing efforts.

Aside from the leagues themselves, other members of the sports community have sought ways to leverage the popularity of social media to augment their coverage of certain events and engage online audiences. For example, during its coverage of the ongoing UEFA European Football Championships, ESPN includes Facebook posts alongside its own match commentary to allow fans to interact with each other. Marketers should keep in mind that posts eliciting follower feedback help put their brands in conversation with prospects.