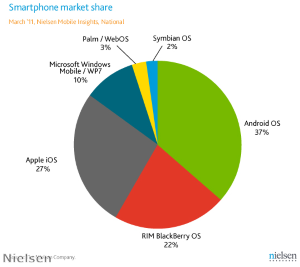 In an age when more than 230 million Americans have internet-enabled phones, marketers should consider which devices will help them reach mobile audiences. The latest figures from Nielsen suggest that Google's Android operating system is the market leader.

Nielsen found that Android now accounts for 37 percent of the smartphone market. Apple is second, holding 27 percent market share, and RIM is a close third, representing 22 percent of the market.

The survey found that nearly one-third of consumers who plan to get a smartphone (31 percent) say Android is their preferred OS. In Nielsen's September survey, 33 percent of respondents wanted an iPhone compared to 26 percent who desired an Android device. Now, Android has surpassed Apple's iOS, which is coveted by just 30 percent of respondents. 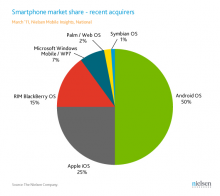 While a large number of consumers will (presumably) soon purchase an Android device, the survey found that many are already new Android owners. Android represents half of the recently acquired device market, while Apple's iOS accounts for one-quarter of recent smartphone purchases.

Notably, this survey was conducted before the recent Locationgate scandal (with Apple and Android being publicly criticized for storing users' location data). This may make marketers pause before investing in locally targeted mobile ads for Android devices (or the iPhone), however, the Android's rising popularity will likely correlate with a rise in Google mobile searches. Marketers might find local SEO catches clicks from the growing number of on-the-go searchers.