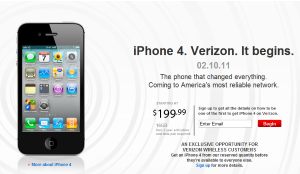 At the end of 2010, Brafton reported that Apple had ramped up its iPhone production and the iPhone could be key to mobile marketing. Many speculated that this increase in iPhone units was linked to an Apple/ Verizon partnership, and today that was proven true when it was announced that the iPhone will be available through Verizon in February. For marketers, this means rich mobile ads created for the iPhone could reach a significantly larger audience.

The iPhone is currently third in the smartphone market by comScore's measure. As Brafton reported, Apple recently lost some ground to Google. Nielsen reports indicate the Android is the fastest-growing system in the market, and ComScore's data shows Google jumped 6.4 percent in the subscriber market between August and November.

Still, data about Google's ascent was released amidst buzz and demand for the iPhone to come to Verizon. Marketers might expect to see Apple's share spike in February when the phone reaches an eager Verizon audience.

Bringing the iPhone to Verizon brings its rich ad formats to subscribers – and marketers may like this. Brafton covered the iAd platform with the initial launch of the iPhone 4. The iAd platform offers highly interactive ad units, and campaigns have been reportedly successful in engaging mobile audiences. (For instance, Brafton reported HBO's True Blood iAd campaign quickly saw more than 1 million impressions and 98 percent of viewers said they were highly engaged with the ad content.)

More recently, we reported that Apple had launched an iAd Producer that lets third parties more easily create ads for Apple mobile devices. This means more marketers can generate iAds, and now they can reach a share of Verizon customers with them.