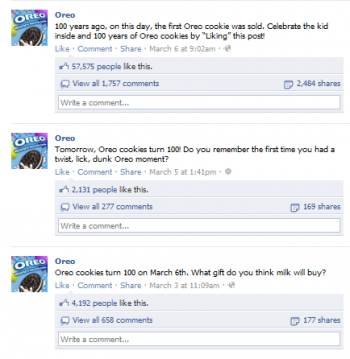 A report from SocialBakers found that businesses are benefiting from social media marketing with both Facebook and Twitter. However, many top consumer-facing brands have seen more success with Facebook marketing, and figures regarding engagement with visual content may be the reason.

Analyzing 10 prominent consumer brands, SocialBakers found that seven of the 10 see more engagement on Facebook than Twitter. For some, such as Starbucks or Redbull, the numbers for Facebook are substantially better. Meanwhile, Coca-Cola, Converse and Playstation have experienced marginally better results with Facebook.

Oreo, Skittles and McDonalds have seen better engagement with their Twitter marketing campaigns, with Oreo showing the only results that are massively superior on the microblogging website. Perhaps this has something to do with the fact that the company is more likely to share text than visual images. Also, unlike some of the brands that see more success with Facebook (such as Coca-Cola) Oreo, Skittles and MacDonalds have failed to adopt the image-friendly Timeline layout.

With Facebook, brands can share visual content in a more user-friendly platform since the launch of Timeline. Brafton recently reported that Timeline is now available for businesses, and the opportunities to leverage greater visual content will only grow.