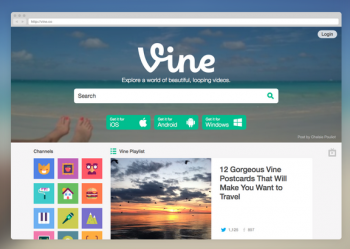 Flash back to last year. Vine was the darling of the social media world. Its six-second looping videos were taking users’ creative content to the next level of virality, and the fact that it was acquired by Twitter made the program look all the more promising. When Instagram launched its own video capabilities, most onlookers were expecting a long and arduous battle to the winner’s circle, but survey the digital marketing landscape now: Vine has notably been missing.

It seems as if the mobile app has attracted advocates, but quietly slipped off the radar for the mass majority. All that could quickly change because Vine has broken out of the mobile-only realm to bring catchy video content to computer monitors across the web.

Earlier this year, the company revealed Vine.co, a website version of the mobile application where people can view and discover catchy video content. A recent announcement on the Official Vine Blog introduced new search features and a redesign meant to make it easier for people to stumble across interesting or funny clips.

There are now channels organized by topics (animals, places, style, food, music and dance), sections for trending tags, like #doubledareThursday, and a list of videos that are popular now.

The best, and also the most important part for Vine’s comeback, is that viewers don’t have to be logged in to watch clips on the Explore page of the site. This essentially opens the site up to the entire web population (which now includes 87 percent of all Americans) rather than limiting it to the 40 million registered users, and it could respark brands’ marketing interests.

Creative video content could take web marketing to the next plane

Hybrid social and video channels are seen as a better fit for B2C organizations because users are on the sites as individuals – not professionals. However, there’s untapped potential to use the animated clips as micro-tutorials for how to use software or mini demos for service subscriptions. If companies can use Snapchat to keep their audiences tuned in, there are certainly opportunities to do the same with streaming content formats that last longer than a few seconds apiece. However, it would require a shift in thinking with regards to video marketing campaigns.

Decision makers who want to succeed on popular channels need to relinquish their grip on presenting serious, stuffy messages all the time and re-focus on being creative and entertaining (when it’s appropriate, of course). People want to be wooed with interesting messages a lot of the time, rather than being sold by hard promotional pitches.