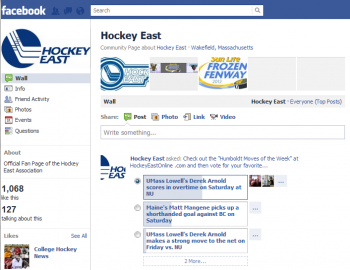 The Hockey East Association, a conference within NCAA Division I men’s ice hockey, recently announced a new multi-channel campaign that highlights outstanding efforts from players of its 10 member institutions. The conference demonstrates how audience engagement via integrated social and content marketing can help build a brand.

The Moves of the Week campaign features a YouTube video, which is essentially a highlight reel from the most recent league games. After viewing the clips from recent games, fans are encouraged to Like Hockey East’s Facebook page to vote on which clip they enjoyed the most. At the end of the season, the league will release the Move of the Year, allowing fans to choose between the weekly winners.

Pairing video content with social media marketing allows the conference, which features such schools as Boston College, Boston University and the University of New Hampshire, to reach fans on different channels. While the campaign is aimed mostly at entertainment and fan interaction, engaging web content is critical for college hockey in its ongoing attempt for national notoriety.

“We are excited about giving our players an extra spotlight for their weekly exploits,” Hockey East Commissioner Joe Bertagna said in a release. “We hope fans enjoy casting their weekly votes.”

Within two hours of announcing the campaign, the league’s Facebook page had garnered dozens of votes. Additionally, including social sharing buttons for Twitter and Google+, as well as Facebook, will allow the league to boost its presence on multiple platforms.

Collegiate athletic departments have been especially aggressive in the use of social media marketing to improve ticket sales and boost publicity. Brafton recently highlighted a campaign from Duke University, which the institution believes helps it market its various athletic programs by reaching alumni and fans at a relatively low cost.