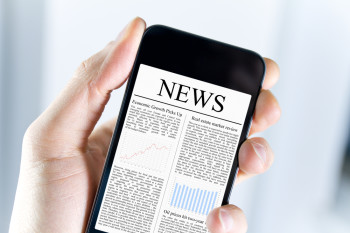 The dwindling population of traditional marketers who thinks news content has no place on the web will be put in their place by new stats. 111 million Americans go online to read headlines every day. That’s the data latest from Nielsen, which tracked the number of consumers who turned to the ‘net for timely articles in September 2013.

Those 111 million online readers represent about half of all American internet users, the report detailed. And most marketers aren’t prepared to turn their backs on such a massive target audience. Though the study gauged how many Americans visited major news websites, it also highlighted that news-hungry U.S. web users spend significant time on search engines and social networks – led by Google and Facebook.

Social networks are making strides in casting off their image as forums dominated by casual conversation. Brafton recently covered a Pew Research Center survey, which revealed 64 percent of Americans are on Facebook and 30 percent of users read news stories they see on the network.

Facebook is just one network, and brands active on other channels should also consider whether there’s a demand for news content that they can fill. There’s no denying that people are seeking information in new ways, and marketers must adapt if they want to connect with their target audiences and compel them to convert.