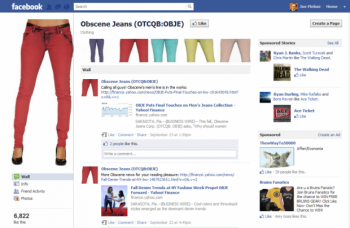 Obscene Jeans, a design-based clothing brand, uses social media marketing as one of its primary forms of engagement and branding, the company announced in a recent release.

The designer fashion brand, which espouses to be more about a lifestyle than denim, believes social media to be is “the biggest shift since the industrial revolution.” The rapid growth of Facebook, which recently hit 800 million users, and Twitter, now at 100 million of its own, lends validity to Obscene Jeans’ views on social and its reliance on the channel.

“Social media is one of the most important cultural shifts since the industrial revolution,” Obscene Jeans CEO Rachel Stark-Cappelli, said in a release. “Ninety-six percent of Generation Y has joined a social network – Facebook alone added 100 million users in just nine months – and it is changing the way they shop, study and socialize. OBJE is planning new tools to exploit the advantages of these fast-growing global networks.”

The company’s apparel has been featured on MTV’s Jersey Shore. While others have tried to distance themselves from the notorious cast of the show, Obscene Jeans embraced the connection – posting social media content related to news stories mentioning both the company and TV show. Beyond that, Obscene includes photographs of new collections on the page. On its Twitter account, it relies on similar tactics – posting news content and photos.

For marketers, targeting younger demographics, diverse web marketing campaigns that integrate social, content marketing and other strategies are ideal – and becoming increasingly popular and successful. Brafton recently reported, for example, that socially engaged users spend 20 to 40 percent more at companies than those who lack a social relationship with the business.