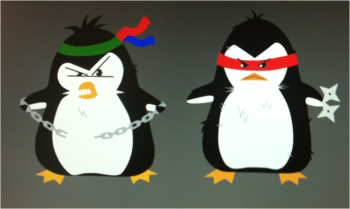 After months of anticipation, Google’s Matt Cutts has alerted search marketers that the next iteration of Penguin – with new spam-fighting 2.0 technology – is now live. Cutts said the updated algorithm was rolling out “within the next few hours” during the latest episode of This Week in Google. (Please note at press time, May 22’s episode #199 is not yet available for listening.) The update is poised to take sharper aim at spam backlinks, refining how Google punishes sites that attempt to boost SEO with link schemes instead of merit-based web content.

Barry Schwartz of Search Engine Land first reported on the announcement, quoting Cutts as saying that 2.3 percent of English queries will be impacted by this update.

Penguin 2.0: A long time in the making

Succeeding in SEO will be the same as it’s always been if you’re doing it right – give the users a great experience. – Matt Cutts, March 2013

After the first Google Penguin was released in April of 2012, Google has consistently released updates every few months, with Penguin 1.1 arriving in the following month and Penguin 1.2 released in October 2012. Marketers have anticipated another Penguin update, and at March’s SMX West conference, Cutts hinted that the next version was around the corner. He noted it would be “one of the most talked about algorithms of the year.”

The new technology – and predicted 2.3 percent of impacted queries – suggests this will be a stronger algorithm. This follows the trend of Penguin’s increased robustness, based on Portent data previously covered by Brafton. The first Penguin update impacted sites with 80 percent spam links, but Google continued to refine its algorithm with each new iteration. By the time Penguin 1.2 was released, Google was able to detect and punish sites with just 50 percent spam links, according to Portent.

What do we know about Penguin 2.0?

The jury is out on exactly how this will impact sites. Marketers who are using custom content as organic linkbait and investing in social experiences that draw natural social links should be safe … Cutts was also quick to point out in a video earlier this month that internal links are unlikely to draw the ire of Penguin – as long as sites are not abusing internal linking privileges with excessive use of exact-match anchor text.

At the same conference where Cutts warned about the upcoming Penguin release, he emphasized some “future of SEO” checkpoints that marketers may want to consider. Here are a few quick quotes on recovery and why links will always matter:

You can also check out more information on specific signs to look for from Brafton’s earlier post about Penguin warning signs.