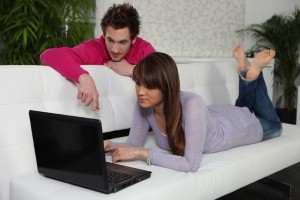 Morgan Stanely predicts that soon, more Americans will access the internet from their mobile devices than from desktops. But which target audiences will be using smartphones instead of PCs?
Internet marketers looking to plan campaigns on channels appropriate for their core audiences may appreciate the latest report from the Pew Internet and American Life Project, in which the research organization asserts that affluent consumers use technology differently than middle-class Americans.
According to the “Use of the internet in higher-income households” report, 95 percent of those familes earning more than $75,000 use the internet and phones. In comparison, 70 percent of households earning less than $75,000 use the internet.
Higher-income households are more likely to check the internet daily through multiple internet-ready devices. Ninety-three percent of them have broadband connectivity, versus 85 percent of households that bring in less than $75,000. Plus, 99 percent of wealthier households use the internet at home, compared to 93 percent of households in lower income brackets.
Perhaps not surprisingly, there was also a correlation between income and the number of high-tech gadgets consumers owned. Seventy-nine percent of households earning more than $75,000 had laptops, another 79 percent had desktops and one in 10 had tablet computers.
This is not to say marketers who appeal to middle-class families should give up internet campaigns. On the contrary, the study is still encouraging, with more than half of households that earn less than $75,000 owning desktops and another 47 percent owning laptops.
Another point the authors make is that affluent Americans, in particular, are increasingly using the internet to get news online. Yet, a separate report from Pew indicates that U.S. consumers of different education levels and age groups turn to search engines to keep up with the news. With this in mind, brands catering to various audiences may consider incorporating news into their content marketing strategies in 2011.