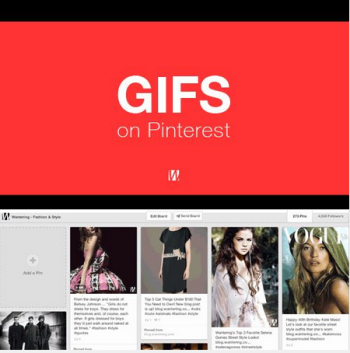 A small group of brands were recently given the gift of GIFs on Pinterest, a present that may help them – and eventually other B2C companies – better market to their target audiences. Before, viewers had to click Pins and open the images in a new window to see the animated clips, but Pinterest is testing animated images directly on brands’ Pinboards.

It’s in companies’ best interests to find out how their core offerings can be paired with visual content to enhance features and appeal to online customers. Why are animated images becoming so important for content marketing?

Number 1. They are in high demand

“We’ve heard from the community that they’d like the ability to post and view GIFs as Pins, so we’re testing ways to make that happen,” a Pinterest spokesperson told Mashable. “We’re always working on ways to help people discover and save the things they love, which can include animated GIFs.”

Marketers have noted internet users’ rising demand for video content, GIFs and other visual formats. Brafton recently covered a study that found 82 percent of marketers think their content is more likely to be consumed when it’s presented with pictures, video or other imagery.

Number 2. They do justice to visual products

Given that Pinterest is one of the most effective social networks for B2C marketing, it makes sense to bring another dimension into the fold. GIFs put images in motion, allowing clothing brands to show apparel against different backdrops (as seen on the Wantering blog’s Pinterest page) or even potentially display the items in movement on models.

Imagine seeing a snapshot of the way a long-coveted dress looks while worn , or how hiking boots repel water when splashing through a puddle. It’s not hard to see how GIFs open the door for video marketing and better digital product demonstration. Perhaps the best news of all is that these advantages aren’t limited to consumer-facing brands, although they may be the biggest beneficiaries of Pinterest GIFs, given the network’s active audience. Brafton recently reported that B2B consumers, and tech buyers in particular, become more likely to purchase products after watching videos online.