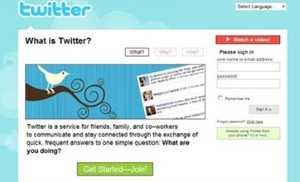 One-third of consumers say they will recommend a business after following it on Twitter, according to eMarketer. With this in mind, it's clear that gaining followers on the microblogging site could be a good way to boost a brand. Now, new technology from Northwestern University ranks Twitter users who offer the most valuable information – and marketers who provide quality content in tweets may be able to get recommended as thought leaders.

Northwestern Professor Alok Choudry and graduate student Ramanathan Narayanan told the New York Times they've developed a website that ranks the most influential Twitter users in different industries based on tweet text analysis, network data and real time response measures. "The idea was how do we determine what are the important tweets and who are the people who really influence others in real time," the Times quotes Choudhary as saying.

The site, Pulse of the Tweeters, is the second Twitter recommendation tool Brafton has reported on this week. We reported yesterday that Bing Social launched a new Twitter 'People Recommendation' feature marketers may like.

But Pulse of the Tweeters goes one step further; it not only gives brands the chance to be recognized as thought leaders through its rankings, but is also offers them insight on trending topics to tweet about. Similar to Google Trends, which offers data on the most frequently searched terms in Google, Pulse of the Tweeters lists the subjects that are currently generating the most chatter on the microblogging site.

This hot topic insight could help marketers make their brands part of Twitter conversations if they generate relevant tweets – but they should be mindful to tweet only quality content. Pulse of the Tweeters aims to help users cut through the clutter of "junk tweets," and its rankings prioritize users who shape Twitter discussions. "[W]hich tweets should you read? Which tweets are being read by media experts on any given subject, such as politics, law, fashion, food? We provide that information," Narayanan told the Times.

This means marketers who are using the platform to appeal to Twitter's more than 194 million active users need to deliver meaningful content to consumers through the channel. In addition to getting recommended on Pulse of the Tweeters, this strategy is good practice for developing followers. According to Chitika, nearly half (47 percent) of consumers who use Twitter want to find news content on the microblogging site.