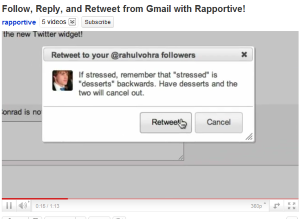 An updated Gmail add-on, Rapportive, may help give Google an edge among Twitter users (and give social marketers an edge with Gmail clients). Rapportive stands to help extend the reach of social marketing efforts by delivering updates and enabling Twitter engagement directly in users' inboxes.

By adding Rapportive to Gmail, users have traditionally been able to see email contacts on Facebook, Twitter and LinkedIn. The feature also allows users to see where people are located and arrange meetups as needed. Now, its updated Twitter service makes tweet engagement more email friendly.

The company explains via video that it is upgrading its Twitter widget. Users can now follow, retweet and reply to Twitter users all without leaving their inboxes. The updated Rapportive also lets users quote (instead of simply retweeting) recent Tweets that display on a left-hand panel in their inboxes. They can also follow conversation threads before replying to messages on Twitter.

The service might be helpful to social marketers using Gmail who want to keep their engagement levels up, and it might also help marketers gain followers more easily.

Rapportive's updated service might help make Gmail more social, but it notably seems to compete with Google's people widget, which adds social context to email content. [Update: Rahul Vohra, CEO of Rapportive, tells us the service integrates the Gmail people widget.] Nonetheless, any service that makes Google seem more social to consumers might help the company gain more of a social following, which could help it boost +1 across the web.