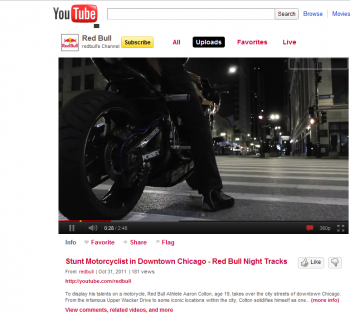 Red Bull and YouTube have worked together since 2007, when the video platform first began catering to those looking to generate original content. In fact, more than a year ago, Brafton reported that YouTube was helping Red Bull rock social media marketing. According to Red Bull, its channels have received 300 million views since launching the social video network in 2007. Its content can be found in the YouTube Sports section of the website and is currently among the top five most popular channels. Although the link between Red Bull and sports may not be intuitive, the company understands that its audience consumes the energy drink because of a desire to boost extreme activity – which can be linked to an interest in extreme sports.

Video content has become increasingly popular for web marketing as younger viewers turn to their internet-connected devices for entertainment more than their televisions.

“Since 2007, YouTube and Red Bull have shared a passion for creating and delivering compelling content for the web,” Werner Brell, managing director of Red Bull Media House North America, said in a release. “Four years later, once again Red Bull Media House is working with YouTube to provide inspirational programming to its new channels initiative.”

While Red Bull will also continue to advertise on television, creating video content for the web is becoming an increasingly popular tactic for businesses. Brafton reported last month that businesses using web video content saw 100 percent better results from prospects when using video created for the web rather than re-purposing TV ads. Of course, creating compelling ads that answer the question of why products or services benefit users is key to winning campaigns – as other video marketing success stories covered by Brafton demonstrate.