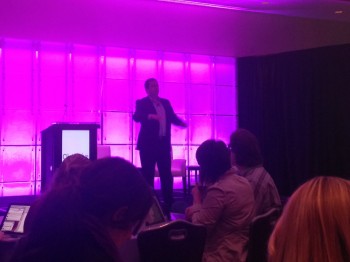 In a world where companies are all expected to be online, there’s pressure to cultivate and maintain a pure reputation. It’s extremely important because around 83 percent of companies will suffer a reputation crisis within the next few years, and much of that relies on the CEO, according to Trackur’s Andy Beal, who delivered the keynote on day two of ClickZ Live New York.

Plus, people are more likely to buy from companies that have positive reputations, and they’re on the lookout for information that will help them decide whether a company is well-liked or not. Around 97 percent of consumers read reviews before they buy from a company. With purchases hanging in the balance, brands must learn from other businesses’ mistakes and avoid them in the future.

Beal offered 15 lessons in reputation management that have cropped up in the past year:

Lesson #1: You only have one reputation

There is no such thing as a personal reputation that’s separate from a company reputation anymore. These two are bound together now that employees and executives use social media and share information online.

Again, companies are sorely mistaken if they think the two worlds can be divided into tidy, unique segments. They are the same and you can’t keep them separate, Beal asserted. Businesses can’t assume in today’s always-on era that things done online will remain private, or that actions done in person won’t make waves on the web.

Case in point: Newark Mayor and Democratic Senate Candidate Cory Booker, who came under fire for chatting with stripper Lynsie Lee over the internet.

Beal said that a lot of people want to sweep reputation issues under the rug, but they won’t find a solution that way. The only real fix a brand misperception is to improve the character underneath. If companies want a better perception, they must do more than improve superficial impressions. They need to rethink the way they do business (and their values) before they can expect customers to have a better impression of them.

The only real fix a brand misperception is to improve the character underneath.

Lesson #4: Just because you can brag doesn’t mean you should

The main takeaway here: Self censor. The things you say on impulse can have a long-lasting impact. As an example, Beal shared a Tweet from a young British driver who hit a bicyclist on the road and wrote a Tweet bragging about it (or at least stating that it was the biker’s fault). She was caught because the police were paying attention to conversations happening online.

Lesson #5: You are always being judged

There is never a private moment, and the things you say in private can and will reflect your public image.

For instance, Mitt Romney suffered reputation damage after he over-shared in a speaking event. He might have assumed the opinions would not go beyond the room, but he was wrong. The same is true for brands today.

Let your employees know your reputation plans because these people are an extension of your brand. They are on the forefront of your business, representing the company to customers. And they’re the most likely to mess it up, Beal pointed out.

Brands that want good reputations need to start with their employees, finding people who can safely be trusted to embody the company’s values online and off.

Let your employees know your reputation plans because these people are an extension of your brand.

Employees (and execs) need to be careful of their actions, particularly online. Whatever they say and do will be a reflection of the business as well. So those Tweets of questionable taste will come back to haunt individuals and the brands they represent.

CEOs and brand managers aren’t necessarily the people behind the social media wheel all the time, but they need to put handles in the hands of a careful few. A lot of PR mishaps are the result of employees who log into the wrong accounts and share personal updates. The people brands hire must be aware that the things they say have to be in line with the brand’s message.

If you want to avoid PR issues, make sure your brand messages align with your customers’ values. Beal shared an unfortunate example in which Pearl Izumi published an ad depicting a runner giving CPR to his dog. The concept was that the runner was able to go so far in the gear, but the dog was on its last legs. People lashed back and the brand should have foreseen this outcome – the target audience probably has a big population of animal lovers and advocates.

One of the biggest mistakes companies can make is to be absent online and ignore feedback.

One of the biggest mistakes companies can make is to be absent online and ignore feedback. Beal recommended setting up some kind of alerts so people are monitoring what’s being said about your brand. Otherwise, you might miss important messages that could have saved customers or protected the brand’s reputation.

In one example: A British Airways Tweet gained visibility because a dissatisfied customer never received a response and the complaint reached a huge audience.

It’s OK to automate some stuff, but you need to pay attention to your scheduled posts or they could quickly become insensitive – i.e.Tesco grocery stores had an automated Tweet that went out during the middle of a PR crisis that wasn’t sensitive to the current situation.

Lesson #12: Don’t capitalize on every event

If there is an appropriate and relevant event, it’s fine to do something on behalf of a brand, but don’t get greedy. It might do more harm than good to recognize an event if it’s done in a way that’s insensitive or could be interpreted as untasteful.

There is no reason to launch smear campaigns against competitors. It could end up tarnishing your own reputation more.

If you have amazing products and services, you’re going to build a great reputation.

If you have amazing products and services, you’re going to build a great reputation. If you try to push something out and manage your reputation while your work out the kinks, you might end up with customers who have poor impressions of your brand.

Companies can’t cover up big lies. People will eventually find out the truth and businesses will face a PR crisis.

Even if companies avoid all of these mistakes, they may still face occasional reputation blips. This is natural because it’s an ongoing process. Like all things that are difficult to achieve, this isn’t something you can set and forget. Brands can create very positive impressions when they produce great content that stands out, employ the right people and start with strong core values.