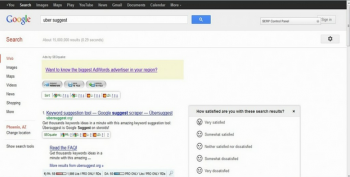 Nathan Sauser, a blogger who covers search engines and personal topics, recently spotted the inclusion of a satisfaction survey on a Google SERP. The survey is asking for feedback related to the relevance of search results. While Google rolls out a series of search updates and adjustments every month, this is the first time the company has directly solicited feedback on a SERP itself.

It’s unclear whether the feedback will inform users’ personal results or if the company is asking searchers to help contribute to its overall ranking by collecting aggregate data about different SERPs value. Either way, marketers should take note that the development necessitates they focus on the user when creating website content.

Google’s search updates, whether a major algorithm changes or minor iterative fixes, often roll out without most consumers noticing. However, marketers relying on SEO are especially tuned into the changes and are forced to consider whether their campaigns and sites comply with Google’s SEO best practices.

As Google continues its changes, feedback provided by users may become more critical to a site’s visibility given the company’s insistence that web developers focus on their readers with the development of any search update.

For the most part, it appears users are satisfied with the company’s result given its massive market share, which Brafton recently reported was at 66.7 percent for the month of May. Earlier this year, it appeared as though many were unhappy with the direction of Google search after the launch of Search, plus Your World, which integrated data from Google+ into results. At the time, Brafton highlighted a Washington Post survey that found more than 60 percent of users said they would cancel accounts and stop using Google products and services. However, given the company’s firm hold over the market, it appears most remain satisfied with Google.