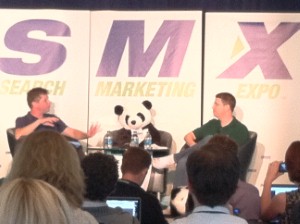 A number of notable SEO and content marketing developments were revealed during Matt Cutts’ You & A session with Marketing Land’s Danny Sullivan during this week’s SMX conference. Here are some of the biggest questions Cutts fielded during the sessions, based on coverage from Mark Traphagen:

Q: When is the next algorithm update expected?

Another payday loan update is expected shortly – as soon as today or this week.

Before there was even time for the dust to settle on last month’s Panda and Payday Loan updates, Matt Cutts announced the SEO waters weren’t yet safe. This news might come as a surprise to some webmasters. The Payday Loan algorithm was introduced around this time last year to tackle spammy search practices around the namesake industry and others known for abusive optimization practices.

Per Cutts’ statement, the coming Payday loan update will impact deceptive queries to clean up any spam left behind by the latest version, which targeted black hat websites.

If marketers notice a sharp drop in their organic traffic for their head terms, they should investigate some symptoms of a Payday Loan hit. Here’s a video that can help with the diagnosis.

Q: Why aren’t there warnings before algorithms are released?

Sullivan asked Cutts why Google doesn’t have any sort of ‘weather service’ announcements that would warn people about algorithm hits. Cutts said the search engine does try to do this when there are major updates, like Panda 4.0. He also pointed people toward Google Webmasters Tools, where they can use the revamped Fetch and Render as Googlebot tool to see how the search engine sees their websites.

SEO would certainly be easier if Google was transparent about the way its algorithms worked and warned webmasters when they were coming, but that may eliminate the purpose of having them. Chances are, marketers would take this news and spend their resources optimizing against those updates rather than finding new ways to make their sites better for end-users.

Q: What do SEOs do now that link-building and guest blogging are dead?

These aren’t dead, per se. Sullivan points out that a number of large businesses with web presences continued to guest blog after Cutts’ famously stated that it was ‘time to stick a fork in the practice because it was so dead.’ In this instance, Cutts didn’t elaborate on his sentiments about guest blogging. Instead, he said it takes some companies more time than others to change gears and reverse, after realizing they’re going in the wrong direction.

While the consensus remains that guest blogging is the wrong way to build links, some argue that there’s value where other goals are concerned, like building brand awareness and boosting engagement.

When it comes to links Matt Cutts said they aren’t dead, but some old approaches to acquiring them are. He explained that you don’t have to go quite as far as Duane Forrester did when he wrote that there’s something wrong if you know when and where your links are coming from,. He did say they should be the result of sharing unique insights (as opposed to a partnership, purchase of trade).

“Linkbuilding as a service often tends to be high risk. Every tool and service you’ve heard at this conference can be beat with your own creativity and resourcefulness in your content. White hat link building is called ‘being excellent.’ Sweat plus creativity,” Cutts said.

Q: What other ranking signals (+1s, AuthorRank, social signals) are active or coming into play?

Cutts holds strong that +1s do not impact organic search rankings (despite the findings published in this study last year), and offered up an interesting perspective on AuthorRank. Google plans to use AuthorRank signals more in the long run, but it’s not a factor right now, he said.

“I’m a big fan of the idea behind AR. But when is it coming? That’s a more difficult problem to solve … I’m not going to say any particular signal works,” Cutts elaborated.

When asked if engagement metrics would be helpful in measuring and evaluating a writer’s authority, he answered, “My experience is that it’s noisy, skewed and gets spammed. Not off the table for the far future. but I’m skeptical about it.”

In the meantime, Cutts made a couple of suggestions about where webmasters should be directing their optimization processes: Site speed and mobile.

Moving forward, it’s all about being the best

When Sullivan asked Cutts to sum the future of search up into one word, he responded with “Quality.”

This really shouldn’t be shocking to any marketers who have followed Google’s updates. Cutts and other Googlers are continuously preaching the merits of providing the best information and reaping the search traffic rewards. Based on historic announcements and Cutts’ messages in this You & A session, it’s clear It’s only going to get harder to spam. Theoretically, brands will be competing more on the value they bring to the table and less on the size of their SEO budgets.