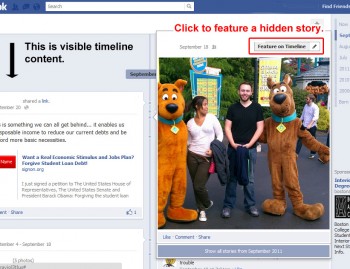 Facebook unveiled its new Timeline feature in September at its annual f8 conference. However, the feature, which streamlines the user profile, had not become available to users – until now. On Thursday, Facebook announced all users now have access to the feature and marketers should be prepared for the more visual, customized layout.

Since the launch of Facebook Timeline, some users have expressed concerns regarding the amount of information on the website. Facebook has also added tools aimed at allowing users to avoid content they do not want to see or select who can see the content they add. With this in mind, marketers should be aware of the fact that they need to offer compelling content or risk being tuned out by users.

However, Facebook announced on November 29 that it has adjusted its privacy controls to give users greater awareness of the information they’re sharing on the website. While the social media giant has added a series of new third-party applications that provide marketers with information, each application or feature a user adds comes with a prompt informing him or her of the effect the app will have on their privacy.

Social media marketing campaigns that rely solely on posting content and engaging users will be less affected than those using applications on the website.

As Timeline continues its roll out, social media marketing campaigns should begin their adjustments earlier to be fully prepared when all users have image-friendly Timelines. Moreover, visual content is an especially important element of social campaigns.

A report from WebLiquidResearch found that images generate the most engagement on Facebook, which provides even further motivation for marketers to embrace Timeline. The study found that 0.37 percent of all images draw some form of action from Facebook users, which is the most of any media type.