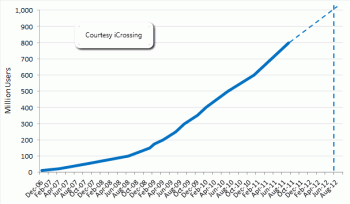 A report from iCrossing predicts that Facebook will likely surpass the 1 billion-user mark by August based on its current growth rate.

According to analyst Greg Lyons, Facebook’s growth has declined to an extent, but the website is still adding new members at a fairly steady pace. It’s likely that the network will see the majority of its growth from new markets, as use in the United States and U.K. has naturally tapered off with so many people already using the platform.

Lyons said that just 3 percent of India is currently active on the social giant, and 16 percent of Brazil inhabitants use the site. Both of these nations are seeing increased access to the web and citizens are expressing a greater desire to connect on a global scale.

Social media marketing campaigns targeting global audiences will be the ones to benefit from the increased Facebook user base. While actually selling to these markets may not be possible for some businesses, those with the capability will be able to expand their social campaigns to new potential fans.

The most recent announcement from Facebook regarding its active user base pegged it at more than 800 million users, Brafton reported in October. This came along with the first unveiling of Timeline, which has been a point of contention as many of the site’s users have expressed concerns over the feature.