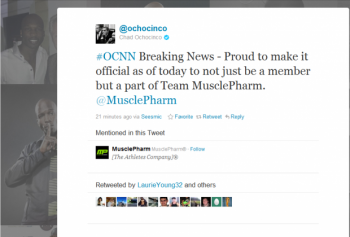 The agreement will leverage the massive follower base Ochocinco has developed – he currently has more than 2.8 million followers on Twitter – to expand brand awareness for the fitness company.

“Like Chad, social media allows us to stay very close to our consumers and Chad gives us instant exposure to a massive audience,” Cory Gregory, senior president and co-founder of MusclePharm, said in a release. “I am involved on a daily basis with our consumers on a social media level and we at MusclePharm have repeatedly seen the tremendous impact it the channel can have for business.”

Whether or not businesses have football-playing brand advocates, they’ll likely find valuable word-of-web referrals among social users. Social media marketing campaigns are becoming increasingly popular as the user base for Facebook, Twitter and other networks continues to expand rapidly. Most recent figures from the companies peg Facebook’s active accounts at more than 800 million, while Twitter surpassed 100 million.