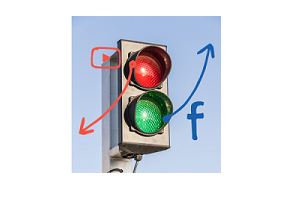 Brands that feared Facebook marketing efforts were for naught in 2014 will be glad they didn’t throw in the towel: New data suggests the network remains the top source of social referral traffic – peaking in Oct. 2014 with roughly 58 percent of all social referrals.

Going into 2014, the marketing value of Facebook was uncertain. The network’s algorithm updates at the end of 2013 cut back on organic visibility, to the point where only about 1-2 percent of the people who have Liked a company Pages see new posts. As Facebook’s founder and president Mark Zuckerberg said in a live chat in November, there were two primary trends that led to brands getting less visibility on the network: user-population growth and more brand competition.

Zuckerberg said businesses could still have successful brand pages without paid advertising, by pushing out quality content that’s relevant and of value to the user.

The bigger the social network, the more referral traffic? Not exactly

On the flipside, the study reported YouTube referral traffic dropped a staggering 94 percent since 2011. The video sharing platform, which overtook Facebook as the largest social network in terms of visits over in July, may be a favorite among Millennials and leader for engagement, accounted for .01% of all social referrals in Q4 2014.

It’s important for marketers to remember that although YouTube may not be the best choice for referral traffic, it’s powerful in driving other marketing goals, like engagement and brand awareness.

Strategist Colin says YouTube is hotter than a stolen habanero. Find out why.