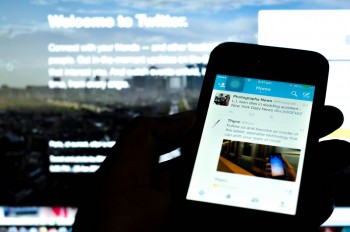 The rise and fall of #RIPTwitter, image via hastagify.me

Over the weekend, rumors spilled that Twitter was revamping its news feed format, and the hashtag #RIPTwitter spread across the network.

Buzzfeed recently reported on a Facebook-style news feed algorithm coming to Twitter soon, theoretically curating what content users see, according to factors such as:

Twitter has been suffering from slowing user growth due to a high barrier of entry to the network’s culture. Twitter’s content can be overwhelming and confusing for new users, which is why they’ve changed the star to the more-familiar heart, added curation tools like Moments, hinted at increasing the character limit, and added more seamless integration for services like Periscope. Many Twitter users perceived that the rumored update to turn the news feed display over to a programmed formula followed this pattern of Twitter lowering its daunting barriers to entry. By proposing to make the best content – often the most relevant and popular – most easily available, Twitter could potentially attract more users with better upfront content.

CEO Jack Dorsey responded to the #RIPTwitter hashtag, which had gone viral worldwide in just hours:

Hello Twitter! Regarding #RIPTwitter: I want you all to know we&#39;re always listening. We never planned to reorder timelines next week.

While Dorsey does reassure his followers that Twitter is inherently live and real-time, and that Twitter is here to stay, many users wonder about his statement that he wasn’t planning on reordering timelines this week. His insight  that Twitter is becoming more Twitter-y also leads Twitter users to wonder about what may be coming soon. The #RIPTwitter hashtag might be an overreaction, but Dorsey still hints at possible upcoming changes, whether to the network’s news feed display or another feature.

As Twitter and Facebook design solutions for emerging technical and social challenges, they’ve often overlapped in services and features, coevolving for almost a decade.

The real news from this weekend is not that Twitter might drastically change a feature that’s been a characteristic of the network from the beginning, or even that people across the platform (and around the world) are protesting its update. It is simply that once again, the two social giants are potentially, momentarily overlapping in functionality until one can edge the other out and force them to adapt and redefine their offering. Many speculate that the change to Twitter’s feed might come in the form of an option to view a curated algorithmic feed, something along the lines of their Top Tweets or While You Were Away features.

Twitter’s top tweets option for searching hashtags is often fairly irrelevant, so third-party services like Tweetdeck (which allow users to optimize their search by taking into consideration influence, retweets and more) come in handy when searching for a curated top Tweets.

Look at &quot;while you were away&quot; at the top of your TL. Tweets you missed from people you follow. Pull to refresh to go back to real-time.

Dorsey’s reminder to check the While you were away feature, which was introduced over a year ago, implies a potential change to its functionality, such as an increase in its presence and scope.

For more on Twitter’s updates to push for a healthier user growth, take a look at how Twitter aims to show promoted content to logged-out users, and how they plan to drive traffic & build awareness with promoted Moments.