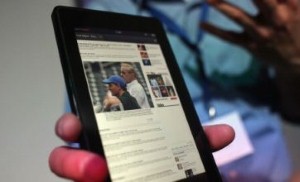 Marketers using social media and looking to target tablet users are in good position as more Americans are investing in the mobile computing devices, and social media availability is increasingly important to users. According to market research firm comScore, those looking to purchase tablets are often swayed by the reliability and overall performance of social media applications on different devices.

Pricing and operating system are also critical considerations, but social media availability is similarly important to many looking to buy a tablet. On a one to 10 scale, social media apps or a reliable experience through the mobile web ranked 6.2 across in importance among those considering a tablet purchase.

For consumers planning to purchase an iPad, social media performance was rated a 6.3 in importance, those interested Android-powered tablets scored scoial a 6 and the Amazon Kindle Fire registered a 6.3. The demand is recognized by social media companies, and social networks have been especially aggressive in their development and support of mobile apps.

Most recently, Google+ announced the release of its long-awaited iPad app at Google I/O last month. Brafton reported that the release of the iPad app came with full capability, which assuaged the concerns of many users frustrated by the delay in the app’s release. Additionally, those using Google+ for social media marketing received a new audience to target with their social content.