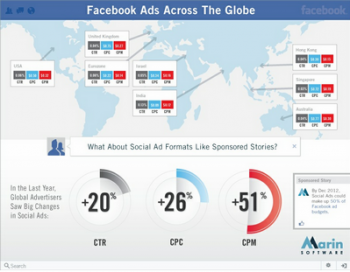 A report from Marin Software found that the addition of Sponsored Stories has helped companies using Facebook marketing find more value for the money they spend on paid social content. According to the study, Sponsored Stories have resulted in more attention for promoted content on Facebook, as brands can insert relevant content into the news feeds of their fans.

Previously, companies struggled to demonstrate ROI from their paid social content. However, Marin found that since the launch of Sponsored Stories, marketers have seen their clickthrough rates increase 20 percent. Still, marketers might want to consider the value of organic influence versus paid social reach as cost per click rose 26 percent, and cost per thousand impressions grew 51 percent.

Frequently, consumers have found that Facebook’s paid social content is entirely irrelevant to their interests. Furthermore, the placement of these ads has been an issue, since so many users have very specific routines on the site. Even as they spend a substantial amount of time on Facebook, they typically concern themselves with only the organic content in their news feeds.

Facebook has made note of this and is actively working to make it easier for social media marketing to appeal to their users. Brafton recently reported that Sponsored Stories are just one of the efforts Facebook has made to shift its paid content to a more organic model, so that users see it within their news feeds. Sponsored Posts have also been added to allow companies to ensure that a piece of their social content is viewed a certain number of times.