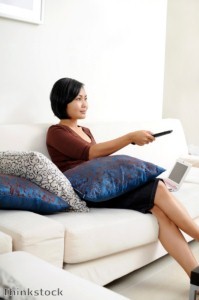 Who says people can't multitask? A new survey from Harris Interactive reveals that Americans frequently shop online while watching television. With this in mind, marketers may want to integrate online and television marketing campaigns, and they might also want tot create search-friendly content that will appeal to consumers watching their favorite programs.

Harris found that more than half of Americans (56 percent) surf the web while they're watching TV. Visiting social networks was another popular activity, cited by 40 percent of respondents, and an additional 18 percent surf the web via their mobile devices. This means television watchers are an active online audience for marketers.

Not only are Americans in front of TV screens searching the web, they're acting on what they find. Nearly one-third of respondents (29 percent) say they shop online while watching TV. This jumped to 39 percent among college grads and 40 percent among 18- to 24-year-olds.

Marketers may wonder if the study indicates they should invest less in television ads, since people devote much of their TV-time attention to the internet. This would likely mean budget rearrangements for many brands – The Wall Street Journal reports that industry forecasts show the $59.7 billion television ad market is positioned to grow steadily over the next five years.

Perhaps the Harris Study should be taken as a sign of the pervasive reach of internet marketing and serve as a reminder to marketers to support television ads – and all multichannel efforts – with high-quality content.