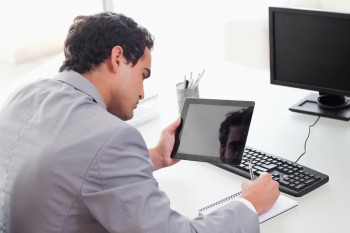 A report from market research firm comScore found that tablet and smartphone users are consuming more video content, but those owning tablets watch more than any other mobile demographic. According to the study, tablet users are three times more likely to watch video content than those owning smartphones, which means video marketing may be ideal for reaching this tech-savvy audience.

ComScore found that smartphone owners are more likely to own tablets than those using less capable mobile phones, with 23.6 percent them also using tablets compared with 10.4 percent of feature phone users. The increasingly tech-savvy consumer places a major emphasis on well-rounded new media marketing efforts for businesses. As users are increasingly connected to the web, a presence in search, social and other channels will help these companies stay relevant.

Video content is becoming more popular among both tablet and smartphone users. However, those owning tablets are more likely to watch videos. ComScore found that 53 percent of tablet owners view videos at least once per month with nearly 10 percent doing so every day. Twenty percent of smartphone users view videos every month with 2.9 percent watching them every day.

“Tablets are one of the most rapidly adopted consumer technologies in history and are poised to fundamentally disrupt the way people engage with the digital world both on-the-go and perhaps most notably, in the home,” Mark Donovan, comScore senior vice president of mobile, said in a release.

In terms of weekly use, 24.6 percent of tablet owners and 10.3 percent of smartphone users access video at least three times per week, while 18.9 percent of those using tablets and 6.7 of smartphone owners watch video on their handsets at least once per week.

Moreover, Brafton recently highlighted a separate report from comScore that suggests more smartphone users are good targets for social campaigns that include links to video. The company’s most recent smartphone audience breakdown found that more than one-third of all mobile phone owners in the U.S. access social networks on the devices. With smartphone owners accounting for an increasingly large portion of them, this figure will likely rise moving forward.