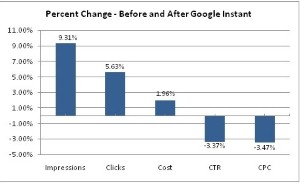 Google Instant is a dynamic search feature the company launched in September. Google now predicts users' queries as they type, and it displays results for suggested searches. As Brafton reported, there were concerns about how this search enhancement would impact search campaigns, particularly with Google's "three-second rule" dictating that impressions would be counted when users hovered over results for more than three seconds.

Marin says its findings make concerns about the impact of Google Instant on search advertising "unfounded." In fact, the firm believes the tool has had a positive impact on campaigns. While ad costs increased by nearly 2 percent after Google Instant launched, cost-per-click rates dropped by more than 3 percent – and clicks are on the rise.

Impression rates are up 9 percent, and click rates are up 5 percent, which Marin claims is an indication of users searching and clicking more as a result of Google Instant. This doesn't mean more people are searching on Google – Brafton has reported that comScore's search rankings suggest Google Instant hasn't driven more traffic to Google sites. However, it could mean Google Instant is changing users' search behavior in a way that marketers will find favorable.

Matt Lawson, vice-president of marketing for Marin Software, says, "Google has pulled off the elusive win-win-win with the release of Instant, driving increased usability for consumers and increased volume for advertisers."

Still, it may take more time and deeper analysis to discern whether and how Google Instant impacts ad success. According to the Wall Street Journal, other online ad firms say that Google Instant hasn't changed campaigns' ROI and that the feature may not be changing the way users search.