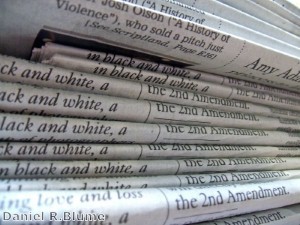 Brafton has reported that three-quarters of Americans look for news on the web, and a new survey shows that the internet has surpassed newspapers for the first time as Americans’ preferred news source. Content marketers interested in producing frequently updated, industry-specific content should take note.

The study, The State of the News Media 2011 from the Pew Project for Excellence in Journalism, asserts that nearly half (41 percent) of Americans say the internet is the source where they get “most of their news about national and international issues.” This demonstrates a 17 percent year-over-year increase. Meanwhile, newspaper readership declined by 5 percent over the same time period.

The survey also found that 46 percent of U.S. consumers say they get news online at least three times a week, compared to just 40 percent who turn to newspapers on a weekly basis. This marks the first time that online news readership exceeds newspaper readership.

Consumers aren’t just turning to the traditional web for news. Pew found that 47 percent of Americans say they have gotten some kind of local news via mobile devices.

For marketers, this may indicate that it’s time to offer timely content about developments in their sectors to engage consumers. Investing in this form of content could pay off; as Brafton has reported, nearly one-third of consumers favor brands affiliated with news.