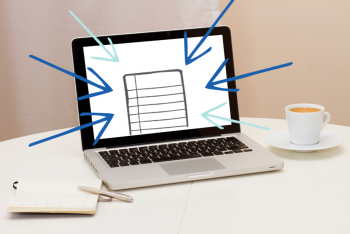 According to the 2015 B2B Technology Content Survey Report from Eccolo Media, the golden number is between two and five.

Almost half (48 percent) of tech buyers surveyed said they read two to five assets before deciding whether to purchase. A full 25 percent said they read six to eight pieces of collateral before they’re ready to buy. This tells marketers – especially those working for B2Bs – that they need to make a strong impression in those few encounters. While a highly selective 4 percent peruse 10 or more pieces of content as they perform their due diligence, the reality is that most prospects only give you a couple of shots to convince them you’re the right business partner. If you fail to do that, they may start to consider competitors.

The next question is: What kinds of content are most influential?

Conversely, the majority of tech buyers find Tweets less effective, with just 4 percent of those surveyed saying they would rank them an influential content type. Likewise, eBooks and podcasts fell to the bottom of the list for most effective assets.

B2B tech buyers are looking for technical specs and proof of concept information to bring to their decision makers. A blog article or Tweet that draws them in may not convince them to buy, but it is an important part of sales funnel. An interest-generating Tweet or search-friendly blog post serves as the hook to get readers on your site, and the lower-funnel pieces like case studies will show them what they gain by investing with you.

In fact, here’s how a B2B tripled followers in a year with a steady stream of Twitter content

A well-balanced content strategy is the best way to win over new customers. Case studies and technical guides might be the most influential, but they aren’t the way people will find your business initially. You need a healthy balance of assets that attract viewers and then educate them with hard-hitting data. Marketers who strike this balance on their websites and build strategies that move leads through the sales funnel will be the most successful.