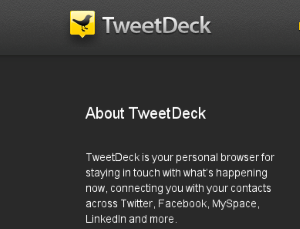 According to TechCrunch, Twitter has acquired the browser TweetDeck for as much as $50 million. The deal may benefit marketers who have TweetDeck logins if Twitter uses the service's “Directory” feature to help users find relevant Twitter accounts.

Although there hasn't been an announcement yet from Twitter, TechCrunch reports that an insider says the deal is done, and TweetDeck has been paid in both cash and Twitter stock. Notably, Twitter's $40 to $50 million offer is said to trump an offer from UberMedia. (Mashable has reported that UberMedia may have initially attempted to buy TweetDeck with the intention of creating a Twitter competitor.)

If Twitter has bought TweetDeck, marketers will want to see how the browser's services are incorporated into the microblogging site. TweetDeck helps users organize their social experience by creating groups. Users can also seamlessly share content across social platforms through easily connecting with Facebook friends and LinkedIn connections via TweetDeck. This means TweetDeck may promote cross-platform sharing, which can boost the visibility of brands with high-quality Tweets.

Plus, any businesses with a TweetDeck login will be featured in TweetDeck's directory. When other users search the directory for key phrases of interest to them, they can find Twitter accounts with optimized usernames.

In addition to potential TweetDeck Directory benefits, marketers will find bringing an SEO eye to their Twitter campaigns helps their businesses get noticed on the microblogging site. As Brafton has reported, a number of new search-friendly features on the site reward users that practice SEO with increased visibility.