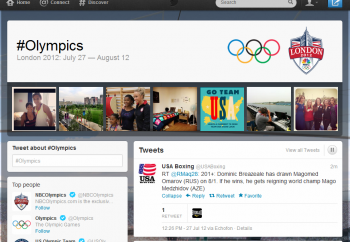 Marketers developing website content related to the London 2012 Olympic Games can now share it with a massive audience, as NBC Olympics and Twitter announced a cross-promotion of the event on the microblogging site. Any content shared with the hashtag #Olympics will appear on the hashtag page, which will be broadcast on NBC to help marketers get their content in front of new audiences. However, it’s critical that companies planning to use this as part of their integrated new media marketing campaign create content relevant to their industry and the Olympics.

In the past, Twitter has rolled out similar hashtag pages for other major sporting events. Most recently the 2012 UEFA European Football Championship was the subject of a hashtag page due to the high-volume of traffic it produced on the microblogging site and its popularity on the network.

“With the eyes of the world focused on London, there is no doubt the conversation on Twitter will rage around the competition, the athletes and the incredible stories for the games,” Gary Zenkel, president of NBC Olympics, said in a release. “This partnership with Twitter will enable NBC Olympics to make an enormous contribution to this conversation, bringing to the swarm of attention surrounding the London Games … “

Using trending topics from around the world as part of a web marketing effort can help companies give their sites an SEO boost as well. However, ensuring that this content remains true to their industries is critical, since users are unlikely to build respect for a brand (or convert) if the connection between articles and offerings isn’t compelling and explicit.

Additionally, the growth of Twitter as an indicator of popularity and hub of communication on the web is perfectly demonstrated by NBC’s partnership with the social network. The Twitter-NBC Olympic hashtag page includes Tweets from notable athletes and others even without the inclusion of the tag.

“Twitter has now become the roar of the crowd during live sporting events …,” Chloe Sladden, vice president of media for Twitter, said in the release. “Partnering with NBC Olympics to create Twitter.com/#Olympics allows us to now shine a spotlight on the best moments within the shared experience of the Olympics and to tell the stories that capture the world’s attention.”

Moving forward, marketers can anticipate the use of hashtag pages for other major events, aside from sports. With the 2012 presidential election upcoming, various entertainment award shows and other popular events, similar efforts could help marketers drive traffic to their sites through Twitter.

Previously, Brafton has highlighted events, such as the Super Bowl, Mother’s Day and others, that spark increased search and social activity.