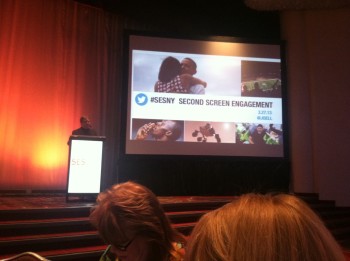 On the second day of SES New York, Twitter’s Vice President of Global Brand Strategy Joel Lunenfeld spoke about the evolving world of Twitter marketing and how the social network influences TV viewing. He highlighted some cornerstone statistics – 400 million monthly unique users visit Twitter.com, and 1 billion Tweets occur every 2.5 days. These data points have circulated within the social media marketing world for some time, but Lunenfeld noted that this engagement has helped Twitter become THE second screen.

In a lot of ways, Twitter’s past, present and future revolves around mobile, and that directly correlates to social TV. Eighty-five percent of Twitter users say their mobile phones are the primary way to access the network. (15 percent access via their tablets.) Perhaps most interesting: The average mobile Twitter user follows 11 brands. Businesses must realize that consumers turn to their mobile devices at all times of the day to engage on Twitter, and relevant custom content and real-time interaction helps build communities that drive returning visitors and referral traffic back to branded websites.

Lunenfeld highlighted another evolution in Twitter: Businesses have begun to create additional accounts and segment their social media profiles to carve out niche followings. Great examples of this strategy involve accounts that invite TV viewers to connect. For example, the London Olympics introduced new accounts for the underwater cameras – these handles published unique pictures of swimmers cruising through the water, and offered fans new content to consume, Retweet and engage with online. Another example, from NASCAR, gives TV viewers unique points of vies by publishing Tweets with streaming video content that shows what it looks like to be driving down the track.

Twitter is also where news breaks. This is evident each time an event happens, and through the site, the public becomes aware of what’s going on around them. Lunenfeld noted that when major events take place, smaller influencers are generally the first to report on the news, which attracts the attention of medium-sized networks all the way up to big brands. In a matter of minutes, a national news network can be one of the first to cover a report based on insights gleaned from Twitter chatter. Also, with major networks also present on the social network, these channels can keep news honest. Lunenfeld called Twitter the “self-cleaning oven for news.”

“Twitter is the shortest distance between you and what you love,” Lunenfeld said.

But Twitter is also the shortest distance between you and significant cultural events. For example, Chris Hadfield – a Canadian Astronaut – uses Twitter to communicate with Earthlings while he orbits our planet. Ever wonder what it’s like to be in space? Tweet Hadfield to find out, he probably has some spare time to chat up there.

Lunenfeld was describing national stories, but his point also reveals that company updates or product releases can exponentially extend brand reach via the microblogging site.

How Twitter and social TV are changing the way people communicate

Lunenfeld called Twitter TV’s social soundtrack. “The social soundtrack is the social commentary that happens while you watch TV on your couch, and it’s happening on Twitter.” He expanded on Mike Proulx’s earlier SES New York keynote on Social TV and its role in connecting web content marketing efforts with on-air media.

Sixty-six percent of mobile users are active on the social network in front of their televisions, and 33 percent Tweet about the shows they’re watching. In fact, 95 percent of all public conversation about TV happens on Twitter.

In many cases, the social network has embedded itself in television culture. During the Super Bowl, 50 percent of commercials used hashtags as calls to action. These features compelled viewers to engage with advertising brands even after their 30-second clips finished. Lunenfeld reported that Super Bowl TV spots with hashtags had a 1.6x greater engagement rate than those clips without the social CTAs.

Whether brands are syncing their Twitter content with television media or not, Twitter amplifies companies’ message association – Promoted Tweets drive message exposure by 22 percent. When companies use Twitter ad options to promote their branded articles, product launches or webinars, they increase the reach of their social media content, and stand to benefit from greater lead generation opportunities.

Lunenfeld explained that the original goal for marketers on Twitter was to create online campaigns that spurred word-of-mouth marketing. However, a lot has changed, and he advised attendees to consider the inverse. How can offline chatter, world events and cultural phenomenon, inspire Twitter marketing efforts?

People turn to the social network to talk about what’s going on in the world, so it’s important for companies to show they’re tuned in, and of course, use news content marketing or other sustainable content creation strategies to be prepared for any conversion opportunity that may come from social chatter and listening.

Editor’s note: Revisions were made to the introduction regarding specific Twitter statistics.