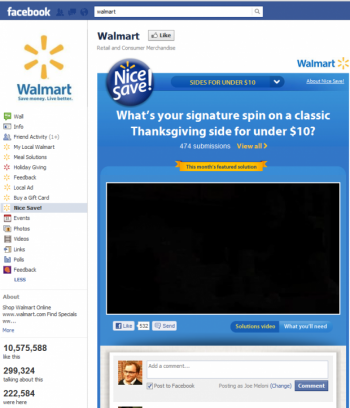 A report from Socialbakers found that Walmart is the leading retailer among major companies looking to cash in on Black Friday. The company currently has more than 10.4 million Facebook fans, which is more than a 4 million fan lead on Target, the second-most popular retail chain on the social giant. Walmart’s success can be an inspiration to brands of all sizes on how to engage eager shoppers through social media marketing this holiday season.

As Black Friday approaches, consumers search the web for new deals they can take advantage of to save money during their holiday shopping.

Walmart is especially successful in interacting with this audience due to both its fan total and its engagement rate. According to the research, more than 5,200 fans interact with the company each month. Walmart is tied with Target for best engagement rate among the top five retailers. However, Walmart’s substantial lead in terms of a fan total gives it a decided edge in this regard.

In general, the company’s social media marketing campaign is paired well with its other web advertising initiatives, firmly positioning the company to improve sales ahead of Black Friday.

“Savvy retailers are combining traditional banner ads and web pages dedicated to Black Friday specials with Facebook posting and Tweets about deals, coupons, merchandise and hot tips,” Jan Rezab, CEO for Socialbakers, said in a release. “This enables them to interact and respond to consumers instantaneously – offering them a massive competitive advantage that converts to increased sales and loyalty at Thanksgiving.”

Last holiday season, Brafton reported that more than half of shoppers used social tools to find promotions online, and this year internet marketers must get ready to incorporate new platforms into their marketing mix if they want to stay competitive. Ahead of the holidays, many leading brands are being more aggressive in their adoption of Google+. Since the company launched Pages two weeks ago, 61 percent of the top 100 brands have launched Pages, Brafton reported.