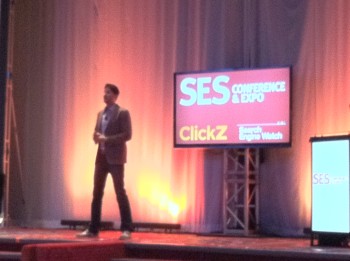 People love great content – and television has traditionally been a leading mode of storytelling, but interactive websites and social media are changing the way people get content from screens. Hill Holliday’s senior VP and director of social media Mike Proulx ended his keynote address at SES New York with a resounding thought: “The story of TV – we’re just at the beginning.” This conclusion summed up his speech in fewer than 10 words, but it says a lot for marketers interested in reaching tuned-in audiences.

Proulx pointed to Google data indicating TV is a major catalyst for web searches. In fact, television prompts 22 percent of mobile searches. Proulx pointed to random spikes in Google search for Robin Sparkles. The search jumps directly correlated to air times for episodes of CBS’ How I Met Your Mother that referenced the character.

Major broadcast networks now include social TV calls to action – whether a Twitter hashtag (Bravo has a hashtag for every city in its Real Housewives franchise) or a YouTube Channel call out. Proulx advised brands to approach television as a new-media opportunity, too. Failing to consider TV as an evolving platform will inevitably keep brands on the backend of innovation, as the rest of the industry moves forward.

“TV is a catalyst for search – the two mediums are intertwined.” – Hill Holliday’s Mike Proulx

Overall, Proulx described the changing TV landscape, viewer behaviors toward broadcast and cable shows and how brands must adapt to various transitions. This intersection of the web and TV has implications for every company that’s building its web presence: “TV is a catalyst for search – the two mediums are intertwined.”

The state of (social) TV

Proulx began his Keynote by discussing how television has changed. Television is becoming device agnostic, and channel agnostic. Hulu, Netflix and live-streaming companies will continue to rise. Viewers no longer wait for their shows to air each week – they want to consume an entire season at once, which forces brands to reconsider how they advertise during live broadcasts. They’re also looking to participate in entertainment experiences through interactive media. In order to complement any quality story, companies must also develop interactive online experiences that pull viewers in, and gives them ownership of the plot line. This is clear with USA Today’s show Psych, which allows fans to vote in real-time on Twitter for the scripted ending of its 100th episode.

Consumers’ behavior toward television has changed. Many people think the medium is dying, but Nielsen found Americans still love TV, with the average American watching more than 35 hours per week. More, 40 percent of smartphone and tablet owners participate in second-screen viewing, yet Google noted that 78 percent of this activity is completely irrelevant to the broadcasts.

Want to pull viewers in and compel them to engage with a given show in a social manner? Proulx seems to suggest that marketers must think outside of the box – create more interactive experiences that support on-air programming, not act as separate entities.

He highlighted some common myths versus realities about how social is changing television.

Beliefs about TV … and marketing truths

3rd Belief: Most people use other devices while watching TV
Fact: 78 percent of second screen activity is unrelated to that TV show. Marketers have to get creative to get in front of audiences viewing programs.

5th belief: Television is new media.
Fact: Well, maybe this is opinion, but Proulx agreed, and it must be approached that way by marketers.

When it comes down to the bare basics, Proulx highlighted brands doing social TV right. For example, Verizon Wireless runs commercials using actual customers’ Twitter handles. These spots ask viewers to reach out to these brand ambassadors about their experience with the company’s Fios product, bridging the gap between on-air promotional content and real-time interactions. Lincoln, another innovative advertiser, asked fans to tweet Super Bowl commercial ideas leading up to the big game. These businesses have developed unique campaigns that draw in viewers by telling unique stories and encouraging reactions. In addition, these spots also give viewers brand ownership – viewers had the opportunity to influence the future of the respective companies by directing potential promotional clips or experience first-hand Version’s unique experience before making the switch from one cable provider to another.

What does it come down to? Proulx emphasized the difference between an enriching social TV experience and hijacking users’ Twitter timelines. Toe the line by providing relevant experiences, with unique custom content, and don’t speak to areas that don’t complement brand visions. He wondered about appropriate outreach during his session, asking, “Should companies not advertising during a TV show develop social media marketing campaigns to capitalize on the broadcast’s buzz?” Proulx was not sure, and neither are we, but companies have to be prepared to monitor the evolution of social TV.

As the market matures, companies must be dynamic in how they embrace social TV. For example, Proulx pointed to examples of social TV during this year’s Super Bowl. The blackout compelled several brands – Oreo, Tide and PBS – to take to social media. These real-time promotional opportunities go to show just how valuable networks like Twitter have become. If an event occurs that captures the public’s attention on television, brands can use social media content as a way to engage tuned-in viewers directly and in seconds.

As a content marketing agency, we know that social media will continue to integrate into daily life, similar to how television will further embed itself into Americans’ online routines. The correlation between TV ratings and social chatter should not be overlooked, but what television, social media and content all come down to is quality storytelling across channels – the only way to generate meaningful customer engagement.