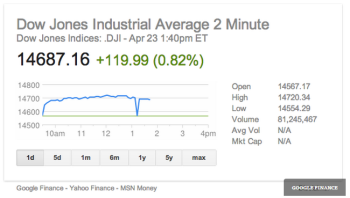 ​Twitter has become the fastest news distribution channel today, making it easy for businesses to get a message in front of customers and prospects in an instant. No one can deny that the social media network circulates headlines and news content faster than ever thought imaginable, and even more professionals would have never suspected Twitter members’ willingness to connect with companies online.

The average mobile Twitter users follows approximately 11 brands. More than 1 billion Tweets occur every 2.5 days. People use Twitter as a way to connect with their friends, family, favorite brands and news sources, making it one platform increasingly susceptible to cyber attacks. What happens when crooked web users infiltrate branded accounts and use companies’ reach for bad? The world takes notice, and interprets false Tweets as facts. “Breaking: Two explosions in the White House and Barack Obama is injured.”

At first glance, the Tweet seemed authentic. In fact, so many people assumed that the message was true that The Dow dropped about 150 points in a few minutes, sending the U.S. stock market into free fall. Of course, it recovered quickly after the Associated Press suspended its account and tweeted from its @APStylebook account about the hacking.

The company published a news article to its website, saying, “The attack on AP’s Twitter account and the AP Mobile Twitter account was preceded by phishing attempts on AP’s corporate network.” Clearly, someone wanted access to AP’s professional network, and found that hacking into Twitter was the easiest method of operation. The correlation between one bad Tweet and dropping stocks shows that business revenue can be impacted by social messaging.

This can have positive implications, but should brands live in fear of getting hacked? It’s clear that Twitter has unveiled some amazing new features this year, from new Cards that help promote products in Tweets to keyword targeting tools for advertisers, but better security features have surprisingly lagged behind.

Medium contributor Evan Hansen recently published an article that suggested Twitter roll out privacy features to further protect its growing user base. He notes that Twitter can’t do much to protect against phishing, “but Twitter could do more than it has.”

Marketers who use Twitter to distribute social media content and engage with online audiences must be aware of hacking attacks like ones seen against AP, Burger King and NPR. More than anything, this incident shows Twitter’s potential in driving economic gains (or losses) and reminds businesses they need a defined social strategy that involves careful brand monitoring. @AP shows a bad Tweet can turn customers away.

Of course, don’t overlook the true story behind this stock-market blunder – Twitter has some amazing power, doesn’t it?