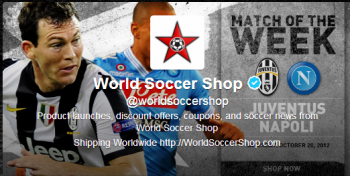 Social media marketing strategies generate sales by engaging target audiences with relevant content. Discounts and social promotions are an effective tool in attracting both new and repeat shoppers, and a Lab24 report relayed by Practical Ecommerce reveals that 66 percent of Twitter users responding follow brands to learn about these offers. Moreover, 47 percent said they keep up with companies to see interesting Tweets. But what if branded content and social promotions could work together to drive engagement and award discounts to certain fans?

WorldSoccerShop.com uses this formula to make its Twitter presence a traffic and conversion driver for its brand. The company, a leading online retailer of soccer equipment, apparel and other merchandise, uses trending soccer news, contests and responsive engagement to appeal to its more than 70,000 followers.

Professional soccer teams in most nations are currently on a two-week hiatus while players represent their countries in qualifying matches for the 2014 World Cup in Brazil. For many fans, this leaves a void as they wait for club competition to resume. To leverage this lull, WorldSoccerShop offered a “Match of the Week” contest on Tuesday. Employees at the company played a game on EA Sports’ FIFA ’13, using Italian clubs Juventus and Napoli. To appeal to customers, the company asked Twitter followers for score predictions, and the company tweeted that jerseys for the winning team would be sold for a limited-time $10 discount.

Throughout the simulated game, WorldSoccerShop live-tweeted updates to keep fans engaged – and generate some banter between supporters of the clubs.

While this particular strategy is clearly tailored to the brand’s sport-hungry audience, the campaign represents innovation in the channel that all brands can learn from. The possibilities for social marketing advancement grow as Twitter adds new features, such as header photos, Surveys and Expanded Tweets. A cornerstone of a successful strategy is careful analysis of the ways new features augment marketing efforts.

Beyond Tuesday’s Match of the Week strategy, WorldSoccerShop quickly took advantage of the header photo from Twitter to publicize other events and offers.

When Twitter announced the header photo last month, CEO Dick Costolo said it was a move to empower brands and consumers to show their personalities through their profiles. WorldSoccerShop distinguishes itself from competitors by demonstrating its understanding of the game its customers love. Recently, Brafton highlighted WorldSoccerShop’s implementation of the header photo for drawing followers to its Match of the Week campaign. Social marketers may be inspired by how other branded Twitter profiles encompassed their messages and spoke to followers more directly with the feature.