“It’s been a while,” says Jeff Baker, opening Season Two’s seventh episode of Above the Fold as if reuniting with an old college roommate who used to slug sodas deep into the night, never leaving the dorm.

In truth, it’s been about two weeks, but he and co-captain Francis Ma chum it up for a good half hour at the top, recapping Jeff’s recent speaking engagement at PubCon. In what sounds like a real Mike Scott-versus-shareholders moment, Jeff explains that his presentation wasn’t pre-loaded, his backup USB failed him and he ultimately had to proceed sans notes. Luckily, he came equipped with both charm and charts, allowing him to win over a sleepy crowd of 50-some late-afternoon Floridians.

“Any time you show somebody a graph that goes up and to the right, and say ‘you can do this,’ it’s like cheating,” Baker explains.

Francis is pleased to hear this, sympathizing with Jeff’s “palms sweaty, mom’s spaghetti” pre-presentation anxiety (that’s a slightly mucked-up Eight Mile reference for those keeping score) while also expressing disappointment that he failed to tout the podcast to the crowd.

Following some standard geographical ignorance – this time Jeff’s California snobbery targets Detroit, after unjustly bashing Florida two weeks ago – we move on to the meat of the program: dissecting Rand Fishkin’s 97-slide presentation on The Next Era of Web Marketing.

Fishkin, founder of SparkToro and former CEO of Moz, has unknowingly gassed these guys up by reaffirming a trend they’ve been trumpeting since Season One: B2B social media platforms are increasingly about socializing more than they are business, and visibility has suffered accordingly.

“It’s a race to the bottom,” Jeff declares, again not only kicking Facebook while they’re down, but using them as a springboard to champion his golden boy, email marketing.

“Ten email addresses are worth 10,000 followers for making more genuine connections,” Baker proclaims, not for the first time.

He then says Faceboook’s plan is akin to “using a shot glass to shovel the water out of your canoe.” They’ve gone too far with the business-oriented approach, selling data and marketing, and now they’re overcompensating in the opposite direction.

Email ain’t exactly sexy either, but as Fishkin notes, despite its age and relative lack of cache, it’s still more powerful. That makes it the Warren Buffett of marketing channels, laying in the cut, not calling a ton of attention to itself, but making selective investments while stacking paper. It remains one of the only channels where you get to put your message directly in front of the viewer. Francis astutely notes it can also be saved, rather than just scrolled past. So as long as email is part of an ongoing structure, balanced by other methods of marketing to your audience, its strengths are accentuated.

A couple weeks ago, Jeff and Francis dissected Google’s troubling encroachment on third-party web publishers by way of increasingly elaborate featured snippets. Conveniently, Fishkin’s presentation featured some tidbits that allow them to tie things back to the conversation on the internet’s ecosystem.

Reclaiming his post as the self-appointed Teddy Roosevelt of the web, Jeff clamors for conservation, noting that one of Rand’s charts says zero-click searches are up 30 percent over the past two years. So what’s that say about the ecosystem? Francis thinks in a year it could be more – Jeff disagrees, because there’s now pushback. We’ve reached a breaking point. Exhibit A: Fishkin is speaking at a conference about this very issue.

There’s another key takeaway here: Click-thru rates can fall even if you’re ranking on page one for a topic or keyword, because of the oversaturation we see in SERP. It’s crap, Jeff notes, defiantly dismissing its official name (organic CTR). But it’s important to take this into account when determining which keywords you want to rank for, by using, say, Moz’s organic CTR score to see how many other distractions are on the page. The more there are, the worse that keyword is for the environment. Feeling his point is made, Jeff shows rare restraint, stopping short of calling keyword stuffers “looters” or “litterers.”

With their remaining 20 minutes, the boys’ ire is directed at two other well-known scourges: the sales funnel and influencer marketing. As it turns out, influencers are not influencing anybody. You can feel the cheese-eating grin taking shape amidst Jeff’s beard as he says this.

Francis says this is ironic given the highly publicized recent college admissions scandal, which revealed (among other things rich people be doin’) that the lady who lived upstairs with John Stamos in “Full House” fleeced her daughter’s way into USC so she could become an influencer. Shameful stuff, but hardly shocking. Jeff somehow missed this whole story, which is also unfortunate, but equally unsurprising.

Anyway, Rand has validated the guys’ gut reactions to influencer marketing. Jeff likens it to the way businesses approached content marketing in 2012 – no idea what it is, but throwing money at it.* To wit, only 50 percent of those utilizing influencer marketing are asking for ROI reporting, a stat that is sneakily galling.

“That’s a bubble,” Jeff says, noting that the backlash has already begun to sully the excitement.

*We should note that Jeff continues to talk about CEOs from 2012-2013 as if they were Neanderthals, despite the fact many of them are still in their positions, potentially reading and listening to our stuff. That was only six or seven years ago, bruh! We do not condone his actions, CEOs.

Belaboring the point, Ma butchers Lori Loughlin’s name, while noting she was also on “Fuller House” (v. important). Hearing that her influencer daughter was on a yacht that had to be turned around at the time the story broke, Jeff urges we (who?) “drop the neutron bomb.” He quickly acknowledges that’s sort of sick, but can’t help lament how vapid everyone has become.

Moving on, Jeff vaguely questions the validity of web targeting data he’s admittedly confused by before things get very tangential. The point seems to be that Fishkin’s takeaways don’t account for social, so they’re a bit misleading. Retargeting and PPC are nuanced, and people often aren’t doing them correctly. But again, he’s a bit confused as to what more that could entail, which begs the question of why we even bothered to cover it.

The question has a bit of a reverse effect, as a discussion of Fishkin’s flywheel – a term coined as a replacement for the sales funnel – gets far too literal.

“I can imagine a flywheel,” Francis says, disclosing that “funnel” makes him think of toilets.

Jeff says it’s a buzzword, because Rand created it and Rand is his SEO spirit animal. He’s definitely also subconsciously thinking of flies buzzing around. He gives Fishkin probably too much credit for “killing the funnel,” and then they speculate that the flywheel is actually an off-the-cuff consolidation of other stuff – the manifestation of someone’s insistence Rand get this presentation under 100 slides. This actually seems reasonable, even likely.

The flywheel looks like “a bunch of stuff on a wheel – stuff that you gotta do – that’s connected,” Jeff stammers. It covers distribution, persona targeting, etc., all connected to really good content that can attract anybody from any channel, unlike the shortsighted, too-rigid funnel.

They’re befuddled by the difference in shape. Envisioning the flywheel has caused Jeff to short-circuit. But the point is that people don’t just show up at specific stages anymore – there are multiple points of entry and influence, as allowed by the more free-flowing flywheel.

If we can move past the logistics and structural specifics of said wheel, it’s a conceptually logical guidepost for an industry speeding toward a new decade’s demands. At the crux of it are your website and email lists – the center of the “wheel” that is your digital campaign. Rather than being so focused on getting people to recognize you in other places, marketers should be more genuine. You don’t need all the followers or all the traffic; you need the right people. 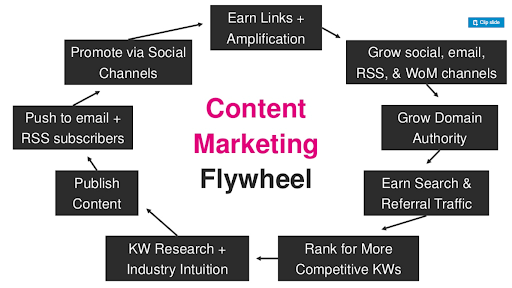 In 2019 and beyond, the approach should incorporate a range of initiatives, including but not limited to: email campaigns, domain authority, earned links, earned search, industry intuition, RSS subscribers, and of course, published content.

“Let’s present Rand with an animated version of the flywheel as bait to get him to come on the show,” Francis says, geeking out at the prospect of fanboying Fishkin in real time, while remaining painfully literal with the metaphor.

Let’s not lose sight of the light, though. Nothing is done in isolation, whether it’s this podcast or a case study targeting the flywheel’s midsection. A piece of content should never be arbitrary, nor should its promotion. Take that to the bank, says Frank (Ma).

“87 percent of all statistics are made up on the spot.”