Video for Every Stage of the Sales Funnel

Video content accounts for approximately 80% of all web traffic. It’s one of the most powerful
communication mediums for making a lasting impression on your target audience. A single,
exceptionally memorable video ad or TV commercial is like a mnemonic device: If you can
recall the content, it’s that much easier to recall the brand that published it.

Video is also an effective way to visually represent complex ideas in a digestible format. Case
in point, 97% of businesses say video helps people gain a better understanding of their
products or services.

Good ideas represented in a great way can provide a whole new perspective on a brand and
its offerings. This is the core tenet of video marketing, and the mindset that the Brafton TV commercial production
videographers bring to visual storytelling at every phase of the sales funnel:

Two-minute how-to or quick-tip videos are examples of top-of-funnel content to be quickly and passively consumed and easily shared across social media channels.

Video testimonials, a video introduction to your services and interviews with satisfied customers can all help move leads from the middle of the sales funnel toward the bottom.

Training videos, walkthroughs and explanations can help customers maximize the value of your products and services and ultimately provide more reason to stick around.

Our professional production teams have hands-on experience with the latest and greatest
video-editing software and camera equipment, as well as access to an on-site studio and a
network of on-screen talent. We also staff animators who create 2D and 3D animations in lieu
of or as complements to your video marketing strategy.

With our help, businesses can create compelling visual content without the high video
production cost. From developing a creative concept, to shooting new footage, splicing
together existing footage and adding visual effects, recording audio and everything in
between, our video services cover the entire spectrum of film production. We are a video production company with the highest of standards.

In the UK? Check out Brafton’s commercial video production in the United Kingdom.

In Australia? Check out Brafton’s commercial video production in Australia.

At Brafton, our videographers can write, produce, shoot, edit and distribute online video ads that will help your company make a great first impression with potential customers.

A corporate video promo is like a video ad but with a greater focus on the people and the corporate values that drive an organization.

Rather than putting products and services front and center, footage focuses more on employees at work, in their communities or with customers.

A video blog is a one- to two-minute, in-studio video production where a presenter reads from a script, usually with supporting imagery on a backdrop.

Video blogs are most effective when embedded in longer-form blog posts as a way to encapsulate the core ideas or complement information. They’re also easy to share on social media.

Vox pops are man-on-the-street style video interviews. They’re short, snappy clips that use nothing but a mic, camera and a few good questions to get real people engaged with important, interesting or entertaining issues.

Polling attendees at conferences, getting opinions on subjects related to your brand and hearing about customers’ experiences with your products are just a few examples of how vox pops can be used as top-of-funnel marketing assets.

These highly informative, instructive and useful videos can range from short and sweet how-to video animations to 10-minute whiteboard presentations that teach you everything you need to know about a particular subject.

Explainer videos can be live action, video-animated or a combination thereof, and can be used to support any type of marketing campaign – from building brand awareness to helping existing customers solve their problems.

Brafton’s videographers, producers and presenters can be wherever you need them to be, ready to record live footage and audio for your next video shoot. We scout out shooting sites, source on-screen talent, conduct interviews and more.

From filming an industrial video that demonstrates your manufacturing prowess, to covering a conference or product launch, our veteran videographers have done it all.

Some concepts are harder than others to represent though live video. But there is almost nothing Brafton’s highly creative motion graphics team cannot bring to life.

Our animators can use 2D and 3D motion graphics to tell stories, explain the features of product or service, demonstrate complex concepts and much more.

Video testimonials are the documentaries of commercial video production: They give satisfied customers a chance to tell their stories on camera.

At Brafton, we can create video testimonials from scratch, including conducting and filming interviews with your customers, or we can splice together existing footage.

Video is a great way to show your products and services in action. You can use visual storytelling to demonstrate specific features and differentiators that are too complicated or less impactful when conveyed through copy.

Whether you want to create an introductory video for new customers, e-learning resources for your staff, or step-by-step product tutorials for every aspect of your product or service, our videographers and animators can help. 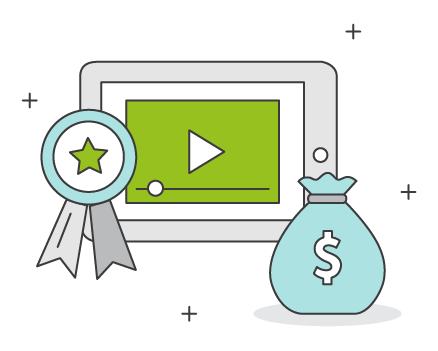 Bring Your Brand to Life With
Video Marketing

From a B2C advertising campaign, to a niche whiteboard video for industry experts, video’s versatility knows no bounds.

Our video production team and animators can help you achieve your commercial goals.

Contact us today to learn more about our
commercial video services.