This week’s Above the Fold guest has 2019 speaking engagements booked all across the country. That makes it all the more remarkable she decided to grace Jeff Baker and Francis Ma with her presence for Episode Three of our second season: “Learn How to Engage and Enrage.”

Nadya Khoja, Chief Growth Officer for Venngage, schools our boys on all things creative, connective and Hogwarts, dodging Patriots parade sirens and empty threats to drink Scotch while on the mic for future episodes. Much of the lesson involves the common threads that tie our content efforts to our audience – whether via visuals, data-driven takeaways or sometimes far-fetched, nerd-life analogies.

Illuminating her current initiative at Venngage, Nadya explains that while from a product perspective they might traffic in graphics, from a content marketing standpoint they’re “trying to take complicated ideas and showcase them to their audience, engaging them by visualizing those concepts.”

It’s a clean crystallization of what we’re all doing here – or at least what Francis and Jeff are supposedly doing. Sometimes effective content creation comes down to simply articulating a known idea in a new and dynamic manner. If that means likening tech company cultures to Harry Potter houses, because that’s what’s going to resonate, so be it. 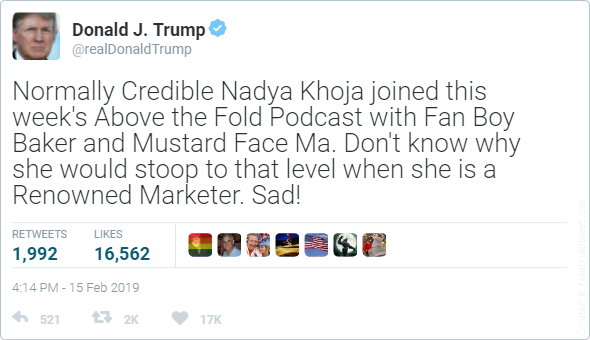 Nadya, who was Venngage’s fourth employee and originally given direction that amounted to “get links,” initially drew Jeff’s SEO fanboy attention by way of CM World, and then more recently with her 12 principles of Viral Content

“You guys are doing it right – our audience should take a look at what Venngage is doing on the blog,” Baker drools, introducing her in a manner akin to the way the teacher of that poor Scranton classroom once presented Michael Scott’s credentials to his “tots.”

Nadya elaborates on one of her favorite principles – the mashup. In our ever-evolving quest to satisfy evergreen content needs, we should always be on the lookout for ways to incorporate trending concepts into themes that retain greater shelf life.

It’s an actionable way of “knowing your audience,” Nadya says, touching on a digital content trope that’s often much simpler in theory than practice. Take two seemingly at-odds topics or ideas and find their connecting thread. That’s how we arrive at a quirky breakdown of tech entities as Hogwarts houses. In doing so, you’ve created a fun, easily digestible piece that still capitalizes on a more time-sensitive search trend (at the time it was put together, Harry queries were up).

Additionally, by sorting all these companies and then sharing the end product with them, it helped better leverage the piece while remaining relevant to the core audience.

Jeff giddily echoes the effectiveness of this approach with some vague allusion to loving “the one about comparing CEOs to athletes” when he could have simply referenced our 2018 Content Marketing Asset Draft as a same-vein example. C’mon Jeff. Nadya appeases him anyway with a line that’s equally appropriate in a meta sense:

“If you have nothing else to tie a concept back to that they are interested in, it’s going to be really tough.”

When Francis asks about her creative process, Nadya offers some refreshingly honest anecdotes, noting that she’s rubbed some people the wrong way when proposing relatively unorthodox ideas in the past. It’s to some degree the cost of doing business, but let’s not get it twisted: Thinking “outside the box” does not mean just blindly throwing stuff at the wall.

Any successful creative process ought to involve a template, and even if protocol isn’t abided to a tee every time, keyword research, in the broad sense, is always useful. To have any legitimate grasp of why a search term – longtail or otherwise – matters, you need to understand its ancillary and semantic relatives as well. Keyword research can always help inform lists or subcategories.

“I’ve always been opposed to writing something without understanding the research behind it,” Nadya says, while Jeff agrees and Francis continues scribbling on his notepad, eating Funyuns.

Ma should be paying attention, though, since it’s a point directly applicable to client-facing work. How do you make a service like industrial ethernet cables interesting? Treat it like a theater class assignment, Nadya suggests (Editor’s note: If you never took a theater class, shame on you for missing a chance to be simultaneously broadened and humbled). Consider everything that could possibly be done with industrial ethernet cables, even if it’s not the express use case, and then you can explore all the mechanisms by which they can be tied in.

This week’s episode steams toward the finish with a pointed discussion of the challenge faced by bigger brands – in this case, Gillette, which was met with a polarized reception in trying to capitalize on the #metoo movement for marketing gain.

Flatly, Nadya reminds us that for a well-known brand, “bad press is bad press.” It’s different for relative newcomers, because the effort generally doesn’t feel as contrived. Jeff agrees, noting that established brands are known to exist for profit’s sake. So when they jump into politics, it doesn’t come off as a genuine ideology or mission (Editor’s Note: This isn’t exactly politics, but you guys kept referring to it as such).

Nadya reminds us to “look at who makes up these boardrooms” where such misguided missions take root (read: old dudes). In other words, let’s not expect too much out of the Gillettes or Old Spices of the marketing world.

The rapid-fire questions segment is cruelly interrupted by fire engine sirens and Pats fans shouting outside Francis’ window. Nadya briefly powers through it, then pauses to acknowledge the undeniable: Bostonites are celebrating another championship, though literally no one else is happy for them.

It’s proposed that Nadya, who’s dabbled in an endeavor known as “Drunk Entrepreneurs,” join again for a Scotch-inspired episode down the road, though the details and logistics are fuzzy as ever. For now, let’s just say thanks for the solid 51 minutes, because lord knows she probably had better things to do than sit through banjos, brand banter and Francis’ occasionally Illmatic-esque audio (seriously, we gotta get you some soundproof foam or something).

She’s done plenty to enlighten us for the time being, but Nadya, if you ever need a break from the globetrotting speaking circuit, feel free to come back and bring order to this circus any time.

Til next week – peace, love and Patagonia pants.