Considered one of the most commanding and authoritative poem openings, the first line exemplifies how much sound can arrest us.

Indeed, many consider this sense to be one of the most potent. If this weren’t the case, would so many expecting mothers play Mozart for their future bundles of joy? Would language have such a rich history in the oral tradition? Would the phrase “roses are red, violets are blue” thrum our deepest sentiments of nostalgia?

Content writing techniques can also include a focus on sound. Harmony in landing pages, blogs, white papers and other pieces of content improves the reading experience, allowing readers to drift into the words. 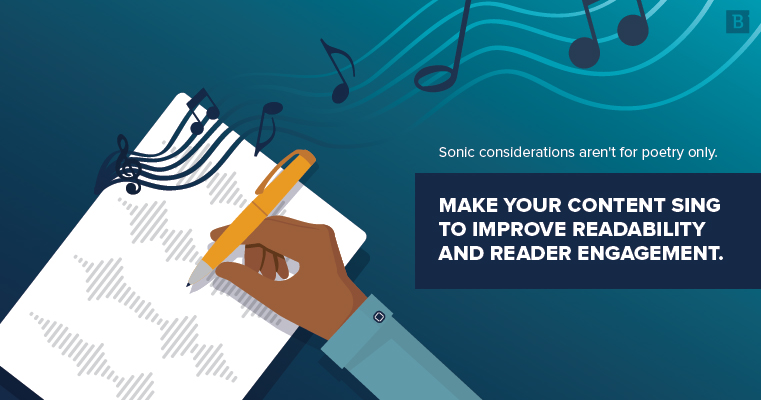 Listen: Sound isn’t for only poetry

You’re not Langston Hughes, so why should you care about sound? Isn’t prosody more of a poet’s tool?

Not so! From email marketing campaigns to case studies, sonic considerations have a place in all writing.

Similarity among sounds helps with flow and readability. When you string together words that resonate in the same manner, readers have an easier time with movement in the copy.

Think back to a moment when you’ve felt like you’re shoehorning a keyword into blog. As for ranking, keyword stuffing is a bad idea. Plus, you can typically hear when a target term doesn’t fit.

Sound is also a way to subconsciously manipulate readers to favor certain information. Increase the music where you want them to have a positive response, and reduce the string of similar sounds when you want a negative response—all while writing the copy objectively.

Whether your last poetry lesson was in grade school or undergrad, you’ve probably heard of some of the ways to classify sonic similarity in writing. Probably the most recognizable technique is rhyme, which we’ve all heard for a long time.

A key point about these tools is that they’re not about only one-to-one relationships. Mastery of sound means understanding and leveraging degrees of sameness. For instance, you probably caught the familiar rhyme/time combination, and words seemingly as different as “crystallized” and “locality” have sonic commonalities.

You can also think about sound thematically in your content. Introductory lessons on rhyme may have prompted you to examine sonic similarity on a word-to-word basis. However, you can also map the noise across sentences, paragraphs, sections and the entire piece of writing.

Consider B2C travel writing for a tours or vacation service, for instance. With descriptions of lush landscapes and scentilating sites, the language should sound as beautiful as the travel opportunities

On the B2B side, particularly technical content, sound manipulation can help cut the density of the text. With a bit of alliteration or assonance, a long-form asset describing the intricacies of DevOps can feel less droll.

Here are some techniques you can use in your content:

Per linguistics experts, phonemes refer to units of speech, particularly the smallest ones. Think of different letters and the varying ways they can produce sound, such as a long a versus a short a in “bake” and “ham,” respectively. We designate these units with a backlash enclosure (i.e. /g/, /k/, /m/).

Phonemes have groupings based on how your body makes the sounds. Here are a few examples for some of the types:

You can look to these and other phonemic groups to create sonic similarity. For instance, check out this selection from our profile of Senior Content Marketing Strategist Christina Mowry, written by Senior Writer Samantha Glavin:

“Sweat drips down Christina Mowry’s forehead. Her fists clench. She centers herself, sizes up the heavy punching bag and then deploys a series of fierce jabs, uppercuts and hooks in dizzying succession.”

Among the many pleasurable sounds in these sentences is the repetition of plosive sounds. “Punching,” “bag,” “deploy,” “jabs” and “uppercuts” all contain the stops /p/ and /b/, which require the same mouth movement for vocalization, with the lips coming together to expel air. String these phonemes together and you get an aggressive symphony—a fitting strategy for a description of a boxer and content marketing pro.

Think about diction, too. Given certain phonemes are more common or nonexistent in words of specific origins, your diction can help you determine which phonemic combinations are more likely to appear in your content.

This term is all about vowels. When you use assonance, you string together similar vowel sounds.

The craft tool is part of what makes rhyme sublime, and it can also produce slant rhymes. For any hip hop fans, it’s also one of the ways skilled lyricists juxtapose seemingly different words and make rhythmic adjustments from one flow to another.

Speaking of hip hop, let’s look at an example from this content marketing wisdom crafted by Managing Editor Andrew Barks:

“Macklemore captured the mood of a particular post-election segment of the population with the November 2016 release of ‘Wednesday Morning.’ The song was introduced to the public by way of The Ellen Degeneres Show and an accompanying Instagram post, highlighting the Seattle rapper’s sense for the moment and the content preferences of his base, while smashing any lingering perception that he was simply the ‘Thrift Shop’ novelty act.” 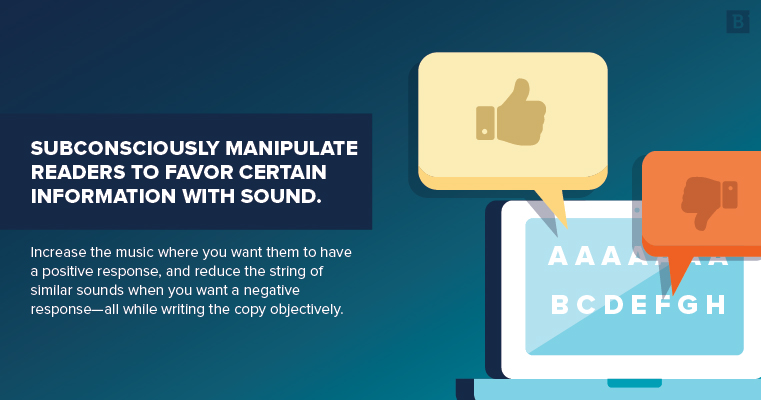 Right from the start, the music appears with the mirrored /a/ sounds in “Macklemore” and “captured.” The same effect is evident in the connection between “election” and “segment” given their mutual /e/.

Assonance can give a lighter touch if you don’t want your content getting too close to a Broadway musical.

While assonance deals with vowels, consonance is all about consonants. Looking back at the last example, the first two words also include consonance, which stems from the re-occurring /c/ sounds. The excerpt even concludes with a sonic quartet, laying on the /t/ in “the ‘Thrift Shop’ novelty act.”

With an article about the ways lyrical acrobats craft their brands, why not whip out the sonic toolkit to emulate their flows?

Alliteration applies to consonants and vowels. However, it works when the same letter or sound appears at the start of consecutive (or close to consecutive) words.

Managing Editor Erin Balsa broke down the basics of boosting your Instagram clout. Let’s look at how she used alliteration:

“Does your industry have an annual conference coming up? Using event hashtags is a method to connect with industry insiders and event attendees. Be sure to include the conference’s branded hashtag in your posts to build relationships with like-minded people.”

Even with groupings as short as two words, the copy creates patterns of sonic consistency. For instance, alliteration appears with “an annual,” “conference coming” and “industry insiders.”

Alliteration gets to the more obvious side of similar sounds. With too much of it, you can have your readers tongue-tied. (Think Peter Piper picked a peck of pickled peppers.)

Yes, rhyme isn’t as popular among contemporary poets. Yes, we intend to show it isn’t just for sing-songy verse. To be sure, when you force a rhyme, your mind can’t help but notice how bad it sounds.

The key to successful rhyme is to use it in surprising ways. Consider again the familiar pair rhyme/time. What makes this rhyme weak? It’s seen so much use that it’s a cliché. Think about combinations that create freshness through their unexpected pairing.

Rhyme has also remained useful through its varied placement. Just as internal rhyme has kept this method of sonic similarity from its stale position at the end of poetic lines, you can slip a rhyme in mid-sentence. Like poetry, the sound can resound to a lower degree if it doesn’t punctuate a thought.

Iambic, tetrameter, scansion, feet: Even among some poets, these terms don’t prompt the most positive memories. Whether the pain stems from the study of Edmund Spenser or William Shakespeare’s sonnets, meter manages to confound many writers.

To be sure, scanning stressed and unstressed syllables in your content can feel too intense when you need to get the right content to the right person at the right time. So you can follow the advice poet Robert Pinsky gives in his classic craft book The Sounds of Poetry: Go with your ear.

When you first learned about iambic pentameter, your instructor probably said it’s the meter that most resembles natural English speech. As such, you know how to hear rises and falls in sentences. Plus, scanning by ear or notating on paper isn’t an exact science, so don’t stress over whether “our” has one or two syllables and where the accent lies.

Paying attention to your syntax is another simple way to keep track of your rhythm. With consistency in how you arrange your clauses, you can create music that carries readers from start to finish in your content.

Whether you’re checking out web content writing tips or another source for advice, the constant caution you’ll see is to avoid turning your pieces into an auditory assault. You want effective flow, but don’t overwhelm readers with too much sonic similarity in a short space.

A good practice is to read writing aloud. You can catch misspellings or other objective errors and determine if the sounds gel the way you want. In fact, it’s one of the ways we review our video blog scripts.

So don’t be afraid to grab a colleague to belt out a dramatic reading. If you’re feeling bold, break it down by playing some instrumental music and practicing your content as a rap or song. 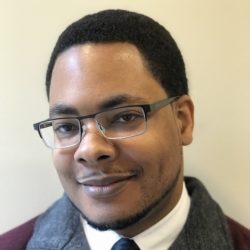