A surefire way to stir up trouble with comedy nerds is to wade into the eternal debate on which sketch comedy troupe or show is the greatest of all time. It really doesn’t matter what your answer is – Mr. Show, Key & Peele, SCTV, Chappelle Show, SNL, In Living Color, The State, Kids in the Hall – someone is bound to take offense to it. (Although, if you really want to get a rise out of people, just say “MadTV” and step back and watch the fireworks.)

Regardless of which one you consider to be the very best, it’s hard to argue that any sketch comedy group has left a greater legacy than “Monty Python.” SNL may have a longer track record, but Monty Python’s output remained remarkably consistent during its run and its irreverent and surrealist approach can be seen in everything from The Simpsons to South Park. It seems pretty clear which one has left the bigger impact. (Note: I may reconsider this point if SNL ever produces a wildly successful Broadway musical.) 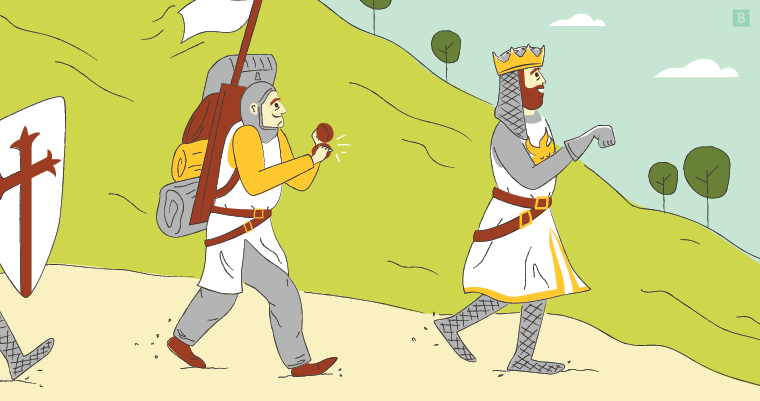 Monty Python’s reach is so vast that deep within its repertoire of skits, films and sketches, you can even find inspiration to fuel your content marketing:

In a classic scene from Monty Python’s 1975 magnum opus, local officials visit a plague-stricken village to collect the deceased (despite how that premise sounds, it’s funny, I promise). In their hurry to rid the hamlet of diseased bodies, they grab a man who insists he’s not quite dead yet, much to their irritation.

Old content can be similarly resilient. Evergreen content, of course, never really loses relevance. But you can also refresh older blogs, infographics and landing pages to reflect industry or market updates, changes to SEO and digital marketing best practices. New material can even be added to flesh out your content and improve its search ranking.

You should also look for opportunities to repurpose successful content in other formats. Build upon the ideas and arguments in one blog to create an entirely new eBook that can be gated and used to capture leads. Take the data points from a white paper and repackage them in an eye-catching infographic. If you’ve got good content, don’t let it go to waste.

2. Beware too much of a good thing – The Meaning of Life

Perhaps the most famous (and infamous, really) scene in 1983’s “The Meaning of Life” involves the comically obese Mr. Creosote. The insatiable glutton wolfs down meal after meal at a swanky fine-dining restaurant, to the point of being given a barf bucket so he can keep going. Things go from gross to grotesque when the after-dinner mint pushes Creosote’s body to the breaking point. If you thought a bit about the plague was in bad taste, you’re probably not going to enjoy the link below:

If there’s one takeaway from that literally gut-busting scene, it’s that too much of a good thing can do a whole lot of damage. That’s just as true when it comes to content marketing. Keyword stuffing, for instance, goes beyond SEO best practices, becoming an unwanted distraction in your prose and likely leading to a drop in your search ranking.

The same goes for your content calendar: Quality will always trump quantity when it comes to content marketing. So trying to cram as much as you can into a week, month or quarter could work against you if it’s not actually serving a purpose in a broader marketing strategy.

3. Stay positive, no matter what – The Life of Brian

Nowadays, Monty Python may be most associated with the musical “Spamalot,” but the group’s musical contributions have actually been pretty extensive over the years. It’s most lasting musical legacy may be a tune from a critical scene in 1979’s “Life of Brian.” When the titular character (who happens to be in the process of being crucified) rues his current dilemma, one of his fellow crucifees tries to cheer him up by telling him to “always look on the bright side of life,” before the entire group of condemned criminals break out into song.

Content marketing may never get quite so dire, but there’s always going to low points and times where you question your strategy or execution. While you certainly want to treat failures as learning opportunities and assess what went wrong and why, dwelling too much on those missteps can be bad for morale and your own headspace.

The other important thing to keep in mind is that it takes a while for content marketing strategies to gain traction and start showing results in both search rankings and engagement metrics. In the best-case scenario, you might see an uptick in key performance indicators in as little as a few months, but most likely it’ll take even longer than that. So, be patient and trust your strategy.

4. Small things can leave a big impact – Monty Python and the Holy Grail

Near the end of King Arthur’s grail quest, his Knights of the Round Table come across the cave, which they have been warned is guarded by a fearsome beast. To their surprise, that beast turns out to be an ostensibly harmless rabbit. However, when the knights approach it, the rabbit mercilessly attacks the fellowship, killing several men in the process.

Just as the Knights of the Round Table shouldn’t have underestimated the Rabbit of Caerbannog, don’t underestimate the impact that small details can have on your content marketing strategy. Small changes can have a big effect on your search ranking and engagement metrics.

Switch up the layout of your blog to keep it varied and guide the reader’s eye down the page. Embed rich media like images, video or social media posts so you don’t make site visitors’ eyes bleed by an unending wall of text.

Tiny tweaks to on-page and off-page SEO can lead to a significant uptick in your site’s visibility.

If you think you’ve done everything to improve your search ranking, you’re probably wrong. With the valuable real estate of Google SERPs becoming harder to come by, you have to use every advantage you can get your hands on to hit page one of Google’s search results, much less rank in the top three slots.

There’s so much more we could learn about content marketing from Monty Python: The Black Knight? Never give up. What have the Romans done for us lately? Don’t take your creative teams for granted.

I’m still struggling to see how the Knights Who Say Ni fit into all of this, so if you have any thoughts, let me know.

Hiring a content marketing specialist? Here’s what you need to look for