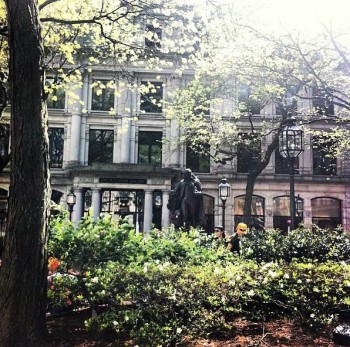 Long before Brafton made Winthrop Square the home of its Boston headquarters, previous tenants were setting a high standard for editorial excellence. The building originally launched as the New England Press Building, and for much of the 20th century, it was the headquarters of the Record American newspaper, one of the Boston Herald’s forerunners.

Almost a century after the Record American first occupied our Winthrop Square home, the technology in our newsroom is certainly more advanced, but our ideals remain similar. We are true to the building’s first content producers, who also believed in strong copy delivered swiftly by a creative, forward-thinking editorial team.

Set in the heart of Boston, just steps from Downtown Crossing and the city’s financial district, the five-story office at Winthrop Square was built into the area’s bustling business community following the Great Fire of 1873.

Fast forward one-hundred years, and the area was called Newspaper Row. In 1966, Pulitzer Prize winning photographer Stanley Forman started his career with the Boston Record American. He felt the newspaper was the best of the surrounding Boston dailies, though he admitted its circulation may not have supported his opinion. Much like Brafton’s modern day newsroom, which has writers, editors, designers, video production teams, strategists and more, the Record American was a collaboration of pressmen, photo engravers, artists, advertising managers, reporters and photographers. With the exception of a few electric typewriters, Forman said the building was more traditional than modern – “the wooden floors were just that, the elevators shook if you were daring enough to get in them. The smell of ink was throughout.”

Still, his recollections of Winthrop Square are fond.

During his tenure at the Record American, Forman was the first photographer to win two consecutive Pulitzers in 1976 and 1977. He went on to win a third Pulitzer in 1979. His groundbreaking photographs, which were published on the front page of the tabloid, as well as several publications throughout the country, helped to pave the way for fire escape legislation and brought Boston’s desegregation busing conflict to the forefront across the nation.

“Those who are lucky enough to have worked for the newspaper have great memories,” he said. Forman continues to work in the field as a WCVB cameraman, noting the industry is a different scene from the one he entered in the 60’s. “Photography is instant now.”

Brafton has also been a witness to the news industry’s rapid transformation in the digital age and has grown with it. In 2010, Content Director Francis Ma was breaking the celebratory news of a new office to the team. It wasn’t the first time Braftonians had switched locations due to growth, but this change was significant. Ma wrote in an email to employees: “When we moved to our Atlantic Avenue office a year ago, we all felt we would be there for at least two years, possibly three. And then we got a new customer. And then three. Now, here we are, a little over a year later and constantly ordering new computers and desks, in a space without enough room for the new people coming on board. The answer? A new office.”

Director of Database Marketing Ryan Collier similarly felt the importance of the move to 1 Winthrop Square. “It felt like we were taking positive steps all the time, but moving to a bigger space in Winthrop Square was an obvious step in the right direction because it meant we had the room to grow and were expecting to succeed,” he recalls.

Beyond the building’s historical legacy, perks of the new headquarters include twice as much editorial space as previous offices, multiple meeting rooms and both a Dunkin Donuts and Starbucks conveniently located across the street.

The days are long gone when Winthrop Square employees encountered a  shaky elevator and could feel the vibration of running presses. Inside Brafton’s editorial space, writers work on high-tech platforms including content management systems made from scratch by in-house developers, and a state-of-the-art production studio was built to assist the expanding video department.

Providing award-winning coverage of Boston’s triumphs and tragedies throughout the 20th century was the Record American’s duty. At Brafton, we pride ourselves on an editorial tradition founded on similar values: Breaking ground in our industry through a resilient, collaborative newsroom approach.