When Alex Dorian walked in the doors of Brafton on his first day as a Content Writer back in early 2014, little did he know that he would become one of the strongest technical writers here, eventually helping our company launch a new content product – or that his experience at Brafton would take him halfway across the world.

Alex got his Dramatic Writing degree at SUNY Purchase. And he has been putting his exceptional writing skills to the test at Brafton for the past three years, covering everything from .NET development to hot water heaters and dehumidification systems. No matter the topic, Alex is always ready to dive in head first to learn all he can about pretty much anything, and then successfully translate that knowledge to his writing.

Below, we find out more about Alex, why he loves creating content for technical and complex accounts, and where his writing ended up taking him elsewhere in the world.

Writing is not Alex’s only love, but it’s certainly one of his biggest. Even from a young age, he was writing for fun.

“Writing was just something I always did,” Alex said. “Whenever I was bored as a kid, I’d make up my own episodes of Arthur. Overall, I really like stories, so I guess I just gravitated toward writing.”

But besides writing, Alex has always had a passion for music.

“Music’s always been an outlet for me, and I’ve been jamming with the same drummer since I was 16,” he explained. “There’s nothing like seeing a crowd react to something you’ve created with so much energy.”

It’s this same attitude that led Alex to get his degree and start on his writing career path. Creating content that readers respond positively to is one of the best parts of his job, and it doesn’t hurt that he gets to expand his own knowledge at the same time.

Getting techy with it 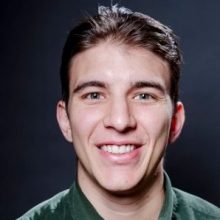 From his humble beginnings as a writer on the Brafton Business and Technology desk (affectionately called “Bizology” in the old days), Alex quickly established himself as a writer who can tackle some of the most difficult to understand industries, and he was promoted to Senior Writer not long after officially joining the team.

Alex says he likes being a writer because editorial content sets the stage for the rest of a strategy.

“Written content dictates how we express ideas regarding topics people care to read about online,” he said. “It drives the whole campaign and sets the tone for infographics, videos and other visual content.”

From a Bostonian to a Kiwi

It’s not every day that a person’s writing skills take them to New Zealand, but Alex got the chance to do just that after his first year with Brafton. Our sister company Castleford put out the call for writers to join their team in Auckland, an opportunity that arises periodically for various roles in our business.

Alex took his tech industry writing expertise halfway across the world to help out Castleford as a Senior Writer for their technology clients. He even led subject matter training sessions on various topics, including networking, data science and the cloud, while he was there.

One of his favorite parts of living and working in New Zealand for a year, besides the amazing scenery, was his coworkers.

“It’s really cliche to say this, but the people were one of my favorite things about Castleford,” he said. “I made some lifelong friends over there and we had a lot of fun working together.”

But it wasn’t all kiwis and roses during his time abroad. The most difficult part?

“I had to write in British English,” he pointed out.

A lifetime of using the letter “z” and omitting the letter “u” made for some necessary adjustments, but he commandeered the almost-foreign way of spelling in no time.

After his stint Down Under, Alex returned to the U.S. in March 2016 and rejoined Brafton’s Editorial team. Needless to say, Brafton missed him and is glad to have him back.

Alex is now a Senior Writer for Brafton’s newly formed Responsive team, and he handles a variety of clients, all of which require high subject matter expertise. But that’s not a problem for Alex – he likes to be challenged and likes to figure out how his content can answer useful questions for readers.

“In my current writing role, I feel I often have to take a step back and ask myself ‘What are you really saying here? Does it contribute valuable insight to a topic people are talking about online? Are you providing information your audience can’t get anywhere else?'” he explains.

For Alex, being a part of the team is not only about focusing on the writing portion for clients. It’s also about how the editorial content he produces fits into their overall strategy.

“I like that every deliverable I produce is part of a greater strategy,” Alex says. “Each article, case study, infographic or whatever has a clear purpose within a campaign. I think that’s important – especially when anybody can spin up an article and put it online.”

Alex also has a front row seat to how content marketing is changing, and he’s seeing firsthand how editorial content is evolving within our clients’ strategies to become more authoritative, trustworthy and vital to helping companies achieve their marketing goals.

He believes that third-party research will eventually fade away, particularly in the tech sector, and to stay on top of their game, writers will need to start relying on subject matter experts with client-side personnel to develop content. For Alex, great content expresses organic ideas, but writers are only going to get those ideas by talking to experts.

Alex’s career path has been interesting and unique, to say the least, and it shows that with dedication and the willingness to learn, your content writing skills can take you anywhere in the world.