Considering the fact that she’s a social media strategist, it probably goes without saying that Anna Mattis is a very social person.

But beyond just being a social person, Anna is someone who enjoys a good conversation, loves to celebrate successes and is always excited to discover something new.

“I’m always learning,” she said. “If someone tells me I’m wrong about something, I think, ‘Cool, I’m about to learn something new.’”

From Burlington to Boston

Anna was first introduced to the power of social media in college. During her freshman year at the University of Vermont, she got a job doing social media and marketing for UVM BORED, an organization that gives students information about on- and off-campus events and activities.

In the four years of promoting UVM BORED, she learned the power of a good tweet and came to appreciate the potential of online content. Though she graduated with a degree in Latin and a minor in Critical Race and Ethnic Studies, she knew she wanted to pursue a career in marketing and social media. 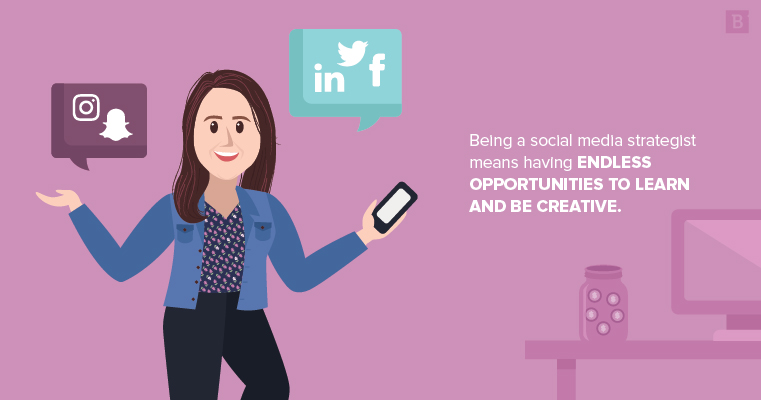 That’s what brought her to Brafton; that, and a craving for Boston city life. She grew up in a small town in upstate New York, then went to college in Burlington, a town of about 42,000. She visited Boston often, but each time, she was reluctant to leave. It just didn’t seem like the couple day’s trip was long enough. After graduation, she began looking for jobs in the city and soon found Brafton.

Embracing a culture of creativity

Initially, Anna thought most clients would mainly be concerned with engagement metrics and ROI statistics. So, she created reports that focused on just the numbers. But the questions clients had in response astonished and delighted her – they were often more excited about having interesting ideas and plans to make their social media pages more inviting.

“They want to make sure you’re keeping up with trends; not just the volume of posting,” she explained. “I was pleasantly surprised at the importance of creativity.”

This is perfect for Anna, for whom learning about developments in the industry is the best part of being a social media strategist.

“The field is constantly changing,” she said. “I love that as a team, we’re always working to keep up with the changes, sharing news … You don’t really get bored in social media. There’s always something fresh, something new that our team is encouraged to explore.”

Brafton’s social media team strives to be forward-thinking, consistently seeking out new ways to keep clients’ networks relevant and helpful. This culture pushes strategists to think outside the box to find new ways to benefit clients, and to share recent trends with each other.

“You don’t really get bored in social media. There’s always something fresh, something new that our team is encouraged to explore.”

One of Anna’s best examples of this is her work with an alternative financial services client whose organic results were, in her words, stagnant. She needed to breath new life into their social strategy, so she proposed an idea they hadn’t tried before: Social video ads.

The client decided to give them a chance, so Anna got to work creating their first one. She had fun making the video and was pleased with the outcome, but things only got better from there. The ad began to generate more leads and encouraged more account sign-ups. The client was so happy with the results, Anna’s social video ads became a foundational part of their strategy.

Beyond being awesome at her job and getting positive feedback from clients, Anna also truly enjoys the fun, friendly atmosphere at the office. She’s active in our Fun Committee, which is exactly what it sounds like: She helps plan holiday parties, office events and fundraisers for charitable causes.

This year, Brafton has a goal to raise $2,000 for Family Reach, a nonprofit dedicated to helping out families affected by cancer. Anna has helped come up with creative ways to raise money, like Dollar Dog Sale fundraisers (which have netted $276 thus far) or Valentine’s Day Candy Grams that co-workers could send to each other (their most successful fundraiser, bringing in $400; Braftonites really like each other).

Currently, the office is in the midst of a competition to see which team can raise the most spare change; each team has its own Mason jar full of coins. Whoever wins will be awarded a team lunch. Anna is, of course, rooting for the social team, but no matter who gets the top prize, she’ll just be happy to be a little bit closer to their goal.