There aren’t many people at Brafton who can start a fire in nature with flint and steel and conduct a killer website audit.

I can only think of one off the top of my head: Julie “YouTube video connesuir” Woon.

Julie has been with Brafton for a year and a half, yet now oversees an entire department. By all accounts, this may be the fastest anyone has ever risen the ranks at Brafton.

Call her Alex Honnold, because she hit that summit fast.

It’s fitting that someone with a love of the outdoors and an appreciation for fitness would help trailblaze a new department at Brafton. Julie didn’t break ground on our consulting services, but you might say she came onto the scene seconds after the ribbon-cutting ceremony, ready to help any way she could.

Legend has it that she applied for an account management position in the Chicago office, but was so dang SEO-smart that Brafton’s sensei of CMS, Sonny Sharp, selflessly sent her to see one Andy Walters. 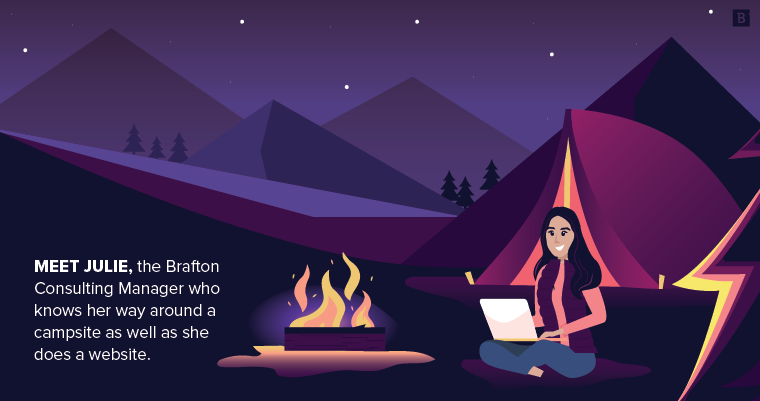 Walters (who would eventually abandon us for Amazon—what do they have that we don’t?) couldn’t say no. Years of SEO experience and a background in broadcast journalism made Woon uniquely qualified to understand both the technical and creative sides of content marketing. This was pretty much exactly the type of genre-defying talent demanded of a consultant in the budding department.

Sure, there was a bit of a learning curve. Julie had been focusing on SEO in the auto industry, and not quite with the same level of technical depth as she would with Brafton.

But the opportunity to work with a variety of clients doing many different things is partly what drew her in, and she had no trouble shifting gears. Initially her attention was focused on client work, which—in the early days of Brafton consulting—consisted mostly of website audits.

“Things like running site audits, looking at the health of site, how it’s functioning, is it following best practices for SEO?” Julie explained. It’s important stuff. Everything from 301 and 302 redirects to mobile friendliness and page speed affect rankings. Still, Julie was destined for more.

No two months are exactly the same. One month you might be doing a ton of site audits and the next you’re doing a website redesign and email marketing. That variety of projects keeps things interesting.

Her enduring work ethic, humility, holistic understanding of content marketing and her status as one of just a few consulting OGs made her the obvious choice to take over as interim Consulting Supervisor when the department’s founder left.

Naturally she nailed it, so it wasn’t long before she was coronated as our official “Consulting Manager.”

Note that Brafton also has a shortage of people who can survive a zombie apocalypse, which makes Julie—who can run a half marathon, ration food, find drinking water in the woods and quite possibly fly (cannot confirm at this time)—invaluable to our tangential aspirations as a business.

“If we say ‘Naked and Afraid’ is level 10, I want to say I’m level 7,” Julie said, after my repeated efforts to get her to humble brag. “I can’t go hunting for food with my bare hands and I’ve never had to create my own shelter, but if I have some stuff I can make it through.”

A real Julie of all trades

“No two months are exactly the same. One month you might be doing a ton of site audits and the next you’re doing a website redesign and email marketing,” Julie said. “That variety of projects keeps things interesting and let’s you dip your toes into a lot of things.”

Speaking of which, in the year and a half Julie has been with Brafton, our consulting capabilities have exponentially expanded to include web-design audits, email marketing, search performance briefs (SEO steroid injection for blog posts) and much more.

When Julie isn’t at Brafton, she spends a good amount of time with this regal animal: 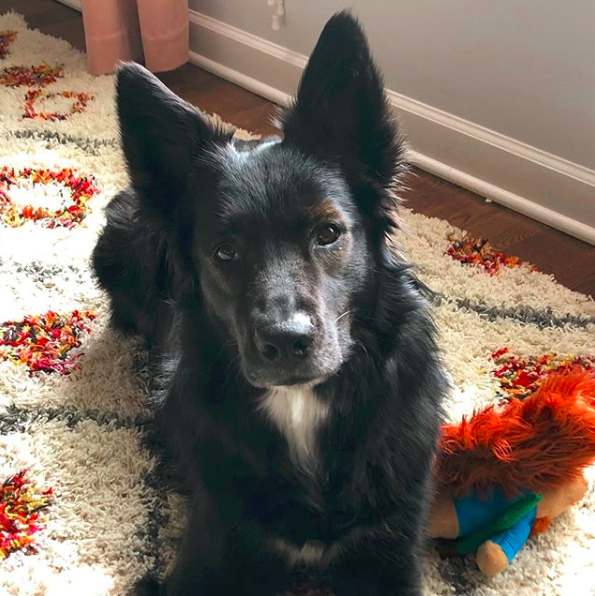 As for outdoor adventures?

There aren’t very many hills or forests in Chicago relative to where Julie grew up (Virginia), and the hiking in the surrounding area can’t hold a candle to some of her more ambitious expeditions (100 miles of the Appalachian Trail, various treks in New Zealand, etc.).

Still, she’s content to go for a run on a nice day and take Layla for a walk. When she’s not doing that, you might find her catching a basketball game with friends, sans booze. Julie’s allergic to all alcohol, which is kind of a shame because I was hoping she might teach Layla to do this and then post it on YouTube:

(Trust her, she’s a professional).

Above all else, the thing you really need to understand about Julie is that she’s an all-around great, kind person and a pleasure to work with.

Sure, she makes Brafton better with her consulting chops, and it’s nice to know we have someone who’s First Aid-certified on the premises.

Mostly, though, we’re happy to be in such great company.

All Brafton: “To Julie!”