If you ask Brafton’s Video Blog Studio Coordinator, Sarah Carlson, you may be surprised by the answer – if you recognize it at all, that is.

You see, her favorite movie is a little psychedelic Czech flick from the ‘60s called “Sedmikrasky” – or “Daisies,” if your Czech is a bit rusty. That creative flair and eye for artistry is what sets her apart from the pack, and also what makes her an indispensable member of the Brafton team.

Sarah puts her considerable creative gifts to work producing incredible video blog content every day of the week. If you’ve enjoyed a Brafton-produced video blog, either as a viewer or client, odds are you have Sarah to thank for that. She produces every single video blog Brafton publishes, working with on-air talent, coordinating production workflows, shooting the video and even at times writing the script. Sarah’s a triple – nay, quadruple – threat. 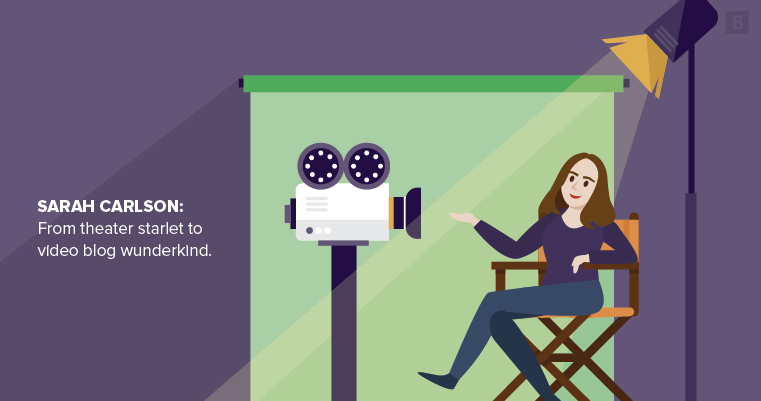 A star is born

Although film has always been one of Sarah’s strongest passions, early on, her creative focus was directed toward the stage. Growing up in Massachusetts, Sarah never missed an opportunity to take part in local musicals and plays, often taking a starring role. She even once donned the top hot, frilly shirt and crushed velvet frock coat to play Willy Wonka in a production of “Willy Wonka and the Chocolate Factory.”

Sarah’s no slouch when it comes to singing either. She’s got some seriously powerful pipes, singing on the stage and in acapella groups throughout the years.

On top of all of that, Sarah has always been avid film fan, going to the movies every chance she gets. By her own estimation, she’s probably made a trip to the closest movie theater at least once a week. That’s some serious commitment.

Despite this clear creative streak, Sarah didn’t always have her eyes set on an artistic career. When she first enrolled in Wellesley College, it was as a pre-med, and her long-term goal was to become a surgeon. She switched gears a couple of times, looking for a career path that felt right, first with economics and then with geology.

Sarah couldn’t ignore her passion for film, however, and in her junior year, decided to take an “Intro to Cinema Media Studies” class to see if it could light a spark. And boy did it ever. Right away, the class rekindled her lifelong love for film, video and media, and she promptly switched majors one last time.

Before long, Sarah was developing, filming and producing movies of her own, including thrillers, documentaries and video essays.

Sarah’s first brush with Brafton would occur before she even left college. In the Summer of 2016, she entered Brafton’s internship program alongside future co-worker Rachel Moskowitz. It was an incredible learning experience, and when she graduated the following year, it wasn’t long before Brafton came calling again.

Since her first day at Brafton on Aug. 21, 2017, Sarah has made a name for herself as a multitalented video blog studio coordinator, effortlessly managing the complex process of creating Brafton video blogs. It hasn’t taken long for Sarah to make the role her own: As of today, she produces every single video blog that comes out of the studio.

Since her first day at Brafton on Aug. 21, 2017, Sarah has made a name for herself as a multitalented video blog studio coordinator, effortlessly managing the complex process of creating Brafton video blogs.

What does that entail? Man, where to start. First of all, Sarah personally shoots every single video blog herself, working with the on-air talent to make sure they capture picture-perfect footage for each one.

Of course, the job doesn’t stop there. Sarah also delivers every video blog to our clients’ CMS platforms, ensuring they integrate, upload and publish properly.

That being said, hiccups will happen here and there, and as the foremost expert on all things video blog, Sarah has become Brafton’s resident troubleshooter when it comes to this product. If there’s a problem, chances are pretty good she’s not only seen it before, but she’s already found the solution.

Think that wraps up Sarah’s work with video blogs? Think again. She even writes video blog and animation scripts for a handful of select accounts. That opportunity to tackle a wide variety of tasks on any given day is something she really enjoys about her job. There’s always something new to do and it never gets stale.

From Boston With Love

What Sarah loves most about working at Brafton, though, is the people. Whether she’s striking up new friendships with video blog presenters like Gigi and Marissa or collaborating with members of other departments, Sarah really values the relationships she’s cultivated within her short time at Brafton.

“Brafton has some really great people,” Sarah says. “Work would be a lot tougher if you didn’t get along with everyone.”

At Brafton, Sarah is part of a close-knit team built around mutual respect and trust – and that’s a working environment you can’t find just anywhere.

From the stage to film, Sarah’s considerable talents have brought her a long way, and Brafton’s lucky to have her creative and detail-oriented eye overseeing every aspect of video blog production.

What’s next for Sarah? Well, she’s always on the lookout for a new film project to shoot or acapella group to join. Or she may just put together Boston’s next big local band. With someone as creatively driven as her, you never can tell.