Brafton Project Manager Kim Scoppetta is a master of production cycle coordination and client communication, among many other personal and professional talents. The secret to her success? A background in psychology that allows her to get inside the head of the client to find out what they really, really want (which is often to zigazig ah).

Thanks to her tireless effort and cheery disposition, Kim has quickly fashioned a reputation for herself as a PM pro and admired coworker. Let’s take a look at how she got here.

Cows and apples and psychology

Originally from Warwick, New York, Kim was raised “literally on cows and apples.” The hilltop home she grew up in and the wide open spaces she was surrounded by certainly made for a different experience than what her parents had — who were both from Brooklyn. 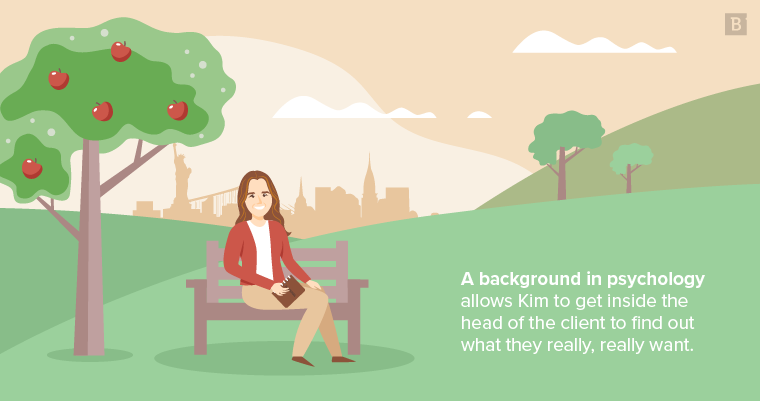 Kim said her parents knew the challenges of raising kids in NYC, having grown up there, and lit out for southern New York state to raise their family, a decision she’s ever-grateful for. Her dad still commutes to Manhattan for work, though.

So while a college-aged Kim was a bit nervous about attending school in a big city, she fell in love with Tufts University after taking a road trip there. It was outside the city, but close enough to travel if one wanted to: the ideal balance.

I love psychology and learning how people work, especially the social side of it.

The initial plan was to major in Spanish and math; and while Spanish stuck, it was math that “went downhill real fast” (a turn of events that many an English major can sympathize with). Yet were it not for that, Kim might have never been introduced to psychology and sociology, her favorite subject matters.

“I love psychology and learning how people work, especially the social side of it,” she says.

Kim eventually double majored in psychology and Spanish, with a minor in sociology in media. While she briefly considered becoming a clinical psychologist, it was industrial and organizational psychology that really captured her attention. Also known as I/O psychology — not to be confused with iO, for you Chicagoans — the discipline involves using psychology in business applications.

“I really started to focus my studies on how the mind interacts with marketing, or how you appeal to the human side of people when you’re showing them a product,” Kim says.

Kim’s first job out of college was perfect training for the role she’d eventually assume with Brafton. Working with a company that helped international students acclimate to life in America, Kim was tasked with overseeing production of guidebooks and brochures, as well as working with liaisons at the partner schools and internal designers. In wearing all those different hats, Kim got great experience and a taste of the project manager life — and she wanted more.

Working with clients, you have to know how to handle people. You might have to take different tones depending on the client.

While she loved working with the company she twice interned with as a student, career growth and professional development came calling in a Brafton job posting for “creative production project manager.” The title and job description meshed exactly with what she was looking for.

After a nervy-but-exciting first couple weeks in which the whirlwind of clients and projects was a tad overwhelming, Kim soon got the hang of things — no doubt thanks to her own knack for understanding how people communicate and work. Her insights and psych background help Kim coordinate both with clients and her own coworkers by aligning expectations, hammering out deadlines and ensuring production is on schedule.

“Working with clients, you have to know how to handle people, how to respond when someone asks a question,” Kim explains. “You might have to take different tones depending on the client.”

As far as project management at Brafton goes, Kim couldn’t be happier.

“My coworkers are some of the most supportive people I know,” Kim says. “They would be there in a heartbeat if I needed anything. Being able to work so closely with writers, designers and the social team is a huge benefit. My ultimate career goal is to be an editor-in-chief, and all the cross-departmental exposure I get in my role is incredibly helpful.”

A renaissance athlete and baker

When she’s not hustling between production calendars and emails, Kim is likely somewhere outdoors on the weekend; her personal planner could pass for a deliverables spreadsheet it’s so jam-packed with activities.

Whether it’s softball, kickboxing, tennis or kickball (her current favorite), Kim is usually outdoors enjoying the air and exercise. Hiking is another favorite of hers, and now that the crisp fall air has arrived you’ll likely be able to catch her apple-picking.

A big to-do on Kim’s list is to put all her foreign language knowledge to use by travelling to Spain. Though she’s never been to the country, travelling with friends to Spain and with family to Italy — buon viaggio from one paisan to another — are boxes she’s itching to check off.

In the meantime, catch Kim in the kitchen whipping up a batch of her famous cream cheese chocolate chip cookies. Adored by her parents, this recipe, which substitutes half of the butter for cream cheese, produces the densest, richest, yummiest cookies one can imagine.

Whether she’s updating client deliverables or her own personal schedule, Kim is a master of all things project management and Brafton is lucky to have her.

Create my strategy and get pricing:
X
Join 50,000 of your peers by getting the latest content marketing updates delivered directly to your inbox weekly.