Some people are born to sell. Joe D’Angelo is one of those people.

And unlike, say, Matthew Broderick in “Ferris Bueller’s Day Off,” Joe uses his powers for the greater good (yes, I consider the financial stability of my employer to be paramount to the greater good).

The history of Joe

Born in Downers Grove, Illinois, Joe was raised primarily a short drive away in Naperville. While other kids were dreaming of becoming astronauts, Joe was already working on his elevator pitches.

“I wanted to be a salesperson from almost day one,” he said. “My dad was in sales. I could see there were a lot of perks. His company had season tickets to the Bulls, Blackhawks, Cubs, Bears, you name it. He had the ability to travel. I always had the gift of gab, so from an early age, I was selling, whether it was teachers on excuses or something else. It was always a natural thing that came to me. I could talk my way in and out of situations.” 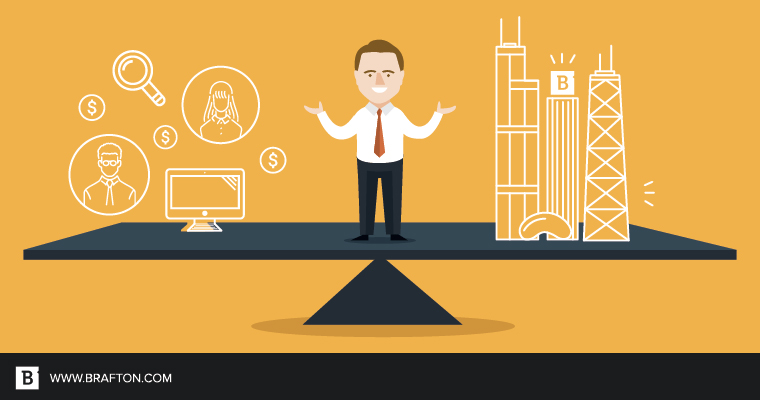 So how does a born salesman with a passion for the art of the deal end up earning a history degree at the University of Kansas?

“It was the storytelling aspect of history that drew me to it,” he remembered. “I was looking to get a piece of paper that said I was smart enough to do something. The quickest and easiest path that kept my interest was U.S. history. But I always knew I was going into sales.”

After graduation, Joe returned to Chicagoland and got a job as a door-to-door salesman. He quickly left that behind for a role at CareerBuilder. Following five years with the human capital behemoth, Joe was ready for a new adventure. He bounced around a couple startups before a former colleague from CareerBuilder turned him on to a little place called Brafton. Joe became one of the first Content Marketing Strategists in our Chicago office in 2012 and has been with the company ever since.

While it may not seem that long ago, 2012 was a much different time in the world of content marketing.

“It was the age of pumping out as many articles as you could,” Joe said.

As Brafton evolved to stay ahead of the shifting content marketing landscape, Joe was shaking things up himself. First he accepted the position of Director of Account Management, a more sales-focused role. After three years of setting his sales goals on fire, he became the Associate Vice President of Account Management, overseeing account teams at Brafton’s Chicago and San Francisco offices.

“For me, it’s all about revenue generation, whether it’s securing revenue or finding new revenue streams in existing business,” Joe said. “My job is not only to train our people and make them the best they can be from a Brafton standpoint, but also from a commercial standpoint. My strengths primarily lie in having much more high-level discussions with the decision-makers in our account base.”

“It’s one thing to be likeable, it’s another to be trustworthy. In sales, trust is the biggest thing.”

Of course, it’s not all sales pitches in fancy offices.

“Any time there’s an angry client, for whatever reason, I’m the second line of defense after the strategist,” he said. “It’s one of the more difficult aspects of the job. If a person is escalated to me, that person is probably angry. It’s my job to figure out a solution on the fly to help fix the problem.”

“I essentially don’t own my calendar,” he said with a laugh. “It’s there for my team to engage with me. There are times there are too many requests for me to jump on. I get double-, triple-booked. It’s a balancing act.”

And, of course, there’s the inherent difficulty of managing teams in different time zones.

“It means getting calls on my cellphone at home,” he said. “People can contact me at all hours of the day. But I come out to San Francisco almost on a monthly basis.”

Still, it’s all worth it to see his team members grow.

“The people working under me are the best part of my role,” Joe said. “I enjoy interacting with people, and they’re great. I love being able to see them improve over time.”

So what’s the secret to Joe’s success? How can others break into the world of sales like he did?

“There are two types of salespeople I always come across,” he said. “There are the people who are smooth talkers, who can adjust on the fly and figure things out. Then there are the people who use data and research to make their cases stronger. I think a great salesperson needs to be both. It’s one thing to be likable, it’s another to be trustworthy. In sales, trust is the biggest thing.”

You don’t need a history degree to see the truth in that.