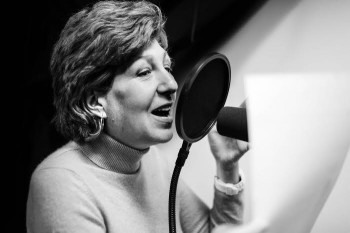 In her almost five years at Brafton, Video Producer Gina’s seen radical changes at in the content marketing landscape. To begin, her current department didn’t exist in 2010!

When Brafton launched video marketing services two years after Gina joined the company as a Content Writer, it was the perfect segue for her to move into the audio-visual landscape. Gina’s talented across all new media – but with more than 25 years of experience as an on-air radio personality, transitioning to video production was a step toward her original passion.

“I love working in a creative environment. The thing I love most about video is that I can SEE all the work come to fruition.”

“The thing I most love about video is seeing all the work come to fruition – taking a concept and making it a reality,” Gina said. “What do I miss about radio? Getting up at 3:30am? The pressure of screwing up live on-air? No. Really, I don’t miss that much about radio except being in front of the mic – but I still get to do voiceover work here!”

As a video producer, Gina creates dynamic videos for clients across industries – and she says her favorite aspect of the job is being able to work in a creative environment.

“I  just finished a hybrid project where we went on location for live action, then created a product demo and animation  – it’s really fun to see all of those pieces come together,” Gina said. (See some of her team’s work here.)

Gina’s teammates recognize the special eye she brings to projects. In appreciation of her hard work and dedication, Gina was recently awarded the quarterly video team MVP.

Even after full days drafting scripts, recording voiceovers and producing videos, Gina thrives on creative projects BrafterHours. This summer she published her children’s book “Boston’s Other Green Monster: A Story About the Big Dig.“ “I was inspired to write it when I was a traffic reporter and discovered there was no children’s book about this massive transformation that happened in the city,” Gina said. “I thought it was a really important piece of history that could be told in a fun and easy-to-understand way.”

Like the Big Dig itself, Gina said there were several roadblocks along the way. The biggest lesson she learned from it? “Never give up.”

Learn more about Gina in our Brafton Q&A: Q:  Which day of the work week are you the most productive?

Whatever day I need to be.

My favorite kinds of videos to create are the ones that take me on location as a producer, since I get to be involved. That said, I love everything we produce and recommend what I think will help the client the most with their goals.

Q:  Have any “hidden talents”?

Not now since the book is out.

Q:  If Brafton were a TV show, which character – from any sitcom, drama or reality show (of any time period) – would represent you?

The show is kind of obscure but I would say Dana Whitaker from Sports Night – always trying to corral chaos.

Brafton’s video team is hiring! Check out job opportunities in Boston and Chicago.

By the numbers: Ranking the most popular SNL videos of all time (infographic)

America’s venerable sketch comedy show has seen its fair share of hilarious skits over the years, but which ones have really found a digital audience?