What do these Super Bowl 50 ad spots have in common? | Brafton 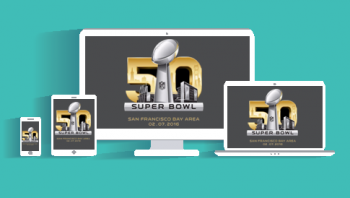 Think Cam Newton can ride The Panthers’ momentum to his first championship title? Could he crack 400 passing yards in the matchup? Will Peyton and the Broncos embarrass themselves in a second consecutive Super Bowl blowout? You and the other 117 million expected viewers will have to wait to find out.

But if football’s not your game, and you prefer the marketing side of the Super Bowl, you won’t have to wait until Sunday night for the most exciting moments and best highlights of the evening.

What do the best Super Bowl 50 ad spots have in common? More and more of them are available before the big game even airs.

A new page in the playbook

Whether ads are released as teasers…

… premiering them early has been drastically helping sales. Since 2010, an increasing number of ads have been put out prematurely. A false start will lose your team 5 yards on the gridiron, but away from the field in the ads world, it can help you capture your market. Why spend $4.8 million for a 30-second spot when you could run it all month as well?

It’s an all-out blitz to get ad content out to as many people as possible on as many platforms as possible. According to The New Yorker’s interview with Tim Calkins, a professor of marketing at Northwestern University, “it is not about winning the Super Bowl but winning an entire month.”

In 2012, Visible Measures found that ads that premiered early had a 600 percent higher reach than those that didn’t. BMW’s 2015 “Newfangled Idea” ad with Katie Couric and Bryant Gumbel went viral several days before Super Bowl XLIX’s broadcast. Like Cam Newton, ads like BMW’s turned out to be a dual-threat: The video reached 3.8 million views in three days on YouTube, which didn’t cost a cent to publish. And, its momentum caused some viewers to tune in to the game and actually anticipate watching the commercial on TV, even though they’d already seen it.

What’s the next most notable feature of the 2016 class of Super Bowl ads? They’re interactive, and invite viewers to take part on social media.

In a bluntly witty, but soberingly dark PSA performance from Dame Helen Mirren, Budweiser announces that they will donate $1 to a safe ride program every time viewers use the hashtag #GiveADamn on Twitter.

Doritos is calling an audible with their 10th and final #CrashTheSuperbowl campaign, and are turning to their social media fans to crowd-source advertising creative for them. They offered amateur video producers a chance to have their fan-made Doritos ads featured on the Superbowl, as well as a $1 million prize.

Ads are topical reviews of the past year

Who recently came out with one of the hottest, most talked about (and most parodied) songs of the past 12 months? Drake did, and his Hotline Bling video now has almost half a billion views on YouTube. That’s why T-Mobile’s ad, “Restricted Bling,” featuring Drake himself, is gaining so much momentum.

Alec Baldwin stars in Amazon Echo’s ad, poking fun at the one story that dominated every Football fan’s newsfeeds. He uses Amazon’s digital assistant, Alexa, to order cheese that won’t cause another “deflategate.”

Avocado In Space uses popular, topical themes like emojis and “the white and gold dress that caused a civil war,” but adds an absurdist flavor to the spot. See for yourself:

Sprinkle in some of the perennial cult actors and you have the recipe for the modern day absurd advertising comedy. While many of them are serious and accomplished performers, using tried and true characters like Willem Dafoe, Christopher Walken, Jeff Goldblum, Liam Neeson, Steven Tyler and the “History channel meme guy” out of context are always welcome with viewers.

TurboTax “hipstered” their image by featuring a cameo from James Lipton, whose notoriety for absurdist but lovably stern self-parody has garnered more millennial fans (who are perhaps conveniently about to enter their first tax season) than his work inside the Actor’s Studio did in the past 21 seasons.

Many of them reference the fact that they are commercials:

And filming hundreds of weiner dogs stampeding in slow motion through a prairie is always a great way to get my attention.

Not all ads have to be funny to work, and not all ads that were supposed to be funny work out – just ask GoDaddy. In fact, commercials for standard products and services like cars, toothpaste and banks that chose not to use humorous content were able to make compelling spots.

While we’re guaranteed to see Clydesdales emotionally selling Budweiser, we’re also expecting several brand new themes, which, through serious in tone, are able to be effective by exploiting our fears, desires and guilt.

Brands like Audi are taking typical sad stories and executing them to create a legitimately uplifting emotional payoff. As if using the immortalized anthem Starman wasn’t enough, this piece starts with a poignant, dejected demeanor, and uses a very visual, cinematic effect to climax in bewildering catharsis. None of us have ever shared the same post-moon depression as a retired Apollo astronaut, but somehow, with the help of David Bowie and some vibrant shots of a shuttle liftoff, we can’t avoid feeling empathy.

Nationwide swung and missed (wrong sport) last year with their morbidly depressing ad, and have since employed a goofy Peyton Manning for comic relief and some football metaphors.

The earlier the ads are released, the more people talk about them. Ads were formerly just the paid accompaniment to the main entertainment, but more recently, the current generation of high-budget, engaging ads are propelled even further by fans and enthusiasts who look forward to them as much as the very content they support. They’re so popular that many of them have coming soon trailers and even pre-roll ads that play before them. Enjoy the game.